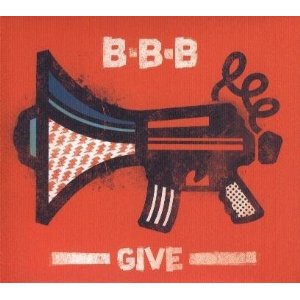 The cover here -- megaphone as gun/gun as megaphone --gives you a clue to the BBB out of New York who mash up dance culture, dub, Balkan styles and much more into often bruising techno-rock . . . and throw in socio-political messages about how people are exploited, the evils of greed and Enemy in Economy.

They can be superficial – yes, here comes the rap break before the crunching shout-aloud bit – but it's hard to deny they are terrific at what they do, and of course the non-specific politics keeps some serious street-cred if you'd like to feel empowered or politically active by dancing.

By being all things to all (young) people they also however end up being not quite anything in particular, and that's their shortcoming. You get the sense that as long as the crowd is moving then their work is being done, and maybe that's enough anyway.

And when the noise is this danceable, addictive and referenced in various familiar styles you could argue this might be what a hip-hop inclined, multi-culti clubland Clash could have sounded like if they'd formed in a decade ago in Brooklyn.

Although that's the sort of socio-political discussion you can't have while your friends are doing shooters and these guys have turned it up to 11.

Another musical meltdown in the global village.

Like the sound of this? Then check out these people.