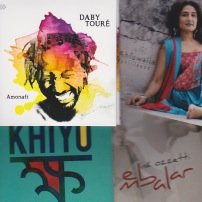 Daby Toure; Amonafi (Cumbancha): Mauritania-born singer/songwriter/guitarist and keyboard player Toure -- of a family who moved from Mali two generations ago -- is a child of his own generation. He grew up listing to Stevie Wonder, the Pplice and Michael Jackson, while also acknowledging his own multiple heritages from Mali and Mauritania. And as with so many African artists -- like blues players migrating from the Delta to Chicago -- Toure moved from West Africa to Paris where he started to make a name, recorded his debut solo album Diam and got signed to Peter Garbriel's Real World label a decade ago. Since then he has recorded with Skip McDonald, moved to Universal then the Cumbancha label (Gabriel loses as many artists as he signs?) and now applies his high, pure and highly melodic voice to these 13 songs  . . . which have little of the yearning and often challenging sound of singers from his home region but rather err towards accessible African-influnced pop music (Oma owes a little something to Roxanne/Sting). Beautifully packaged, sensitive and very much at the light end of world music. Nothing to quibble with, but not a lot to get excited over either. Pleasant.

Kiran Ahluwalia; Sanata/Stillness (Kirnan/Arc): Well, no. Despite the title this is not "stillness" in the way we might think. This nine song collection opens with the brash announcement -- through a shudder of electric guitar and drone before singer Ahluwalia enters -- that this world music-cum-rock album will upset any presumptions of the title. Multiple award-winning, India-born, New York-based Canadian rocks of into a travelogue of traditional Indian styles, Sahara blues (the first salvo of Hayat and the title track third up are the announcements), a bit of jazz-rock . . . and in truth anything which isn't “stillness” or even a sense of stasis. Despite constantly moving musical ground that title reference is doubtless because the lyrics — in translation — refer to internal states of emotion, some of which are spiritual and others more about the secular world. As close to Mali as India (her birthplace), this hurdles distance courtesy of persuasive musicianship (electric guitar and bass alongside tabla and harmonium) and her compelling vocals. It's where never the twain shall meet, and does. In a good way.

Na Ozzetti; Embalar (Circus): From the same Brazilian source which brought us the increasingly fascinating Marina Wisnik and Caca Machado comes this album by -- I think, there seem to be family members involved too -- singer Na Ozzetti (who appeared on the posted Caca Machado track there), and again we find ourselves in an unpredictable fault line between Latin pop, post-tropicalia, elevated art music and seductive cantina music as she slips here vocals over lively acoustic guitars and vigorous percussion patterns and some desert-wide electric guitar soundscapes. You can download it from here, but check out this sample track to get the bent-pop mood.

Khiyo ; Bengali Music With a London Sound (Arc Music): If you get controversy you do need to follow up on it, if not exploit it. But you get the sense this London-based outfit -- which three years ago faced a wave of anger from tradionalist/retrograde Bangladeshi for their version of the national anthem Amar Shonar Bangle -- haven't quite figured out what ground they stand on. To outsiders their anthem-version seemed quite respectful. That said, their homeland critics -- if they are still listening, and we suspect they aren't anymore -- won't be placated by this debut on which they offer their interpretations of various songs by Bengali Baul muscians and the country's national poet Kazi Nazrul Islam. His classic Rum Jhum Rumu Jhumu here gets a slow reading with dramatic jazz piano. Bandman/arranger Oliver Weeks recasts some of these songs as something like prog-rock for the dancefloor with wild viola and thumping beats (Murshidi). The subtle pieces are the most affecting, but in a typical head-swivel here something furious follows of abuts up against its exact opposite. A more consistent,  less out-to-impress collection would have had more impact. See the clip below. 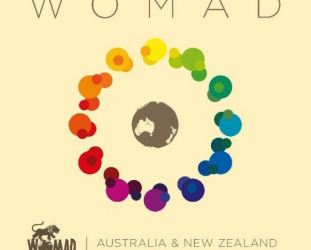