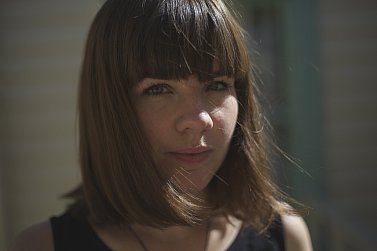 The New Zealand singer-songwriter Tiny Ruins – aka Holly Fullbrook – has appeared frequently at Elsewhere because her mature, thoughtful and folk-framed albums have always found favour . . . and increasingly so in the wider world we are pleased to report.

At Elsewhere she has been interviewed and reviewed, but she has never answered our Famous Elsewhere Questionnaire. Not even our “songwriter” version.

But because she is on the bill at this year's Womad we thought it timely to hand her our specially devised world music version of the questionnaire to see what she might make of it.

(The "recipe" sounds simple and useful!)

Around the age of three I was rather taken by Tanita Tikaram. Second place certainly goes to The Beatles, whose ‘Red’ and ‘Blue’ albums I listened to tirelessly from around the age of seven on a record player I’d commandeered. The song of theirs that really won me over was Fool on the Hill.

I think my first serious role was at the age of 10, performing a Morecomb & Wise comedy sketch at Titirangi Lopdell House Theatre with my friend Marama.

There have been a few odd shows, it’s hard to pick one, but a favourite of mine was the final show of a long stint touring Brightly Painted One last year. Cass, Alex & I were in Iceland after almost five months on the road together, and our last show was in a tiny, cramped dive bar packed to the gills with rowdy, drunken youths, and we kind of went all out and played super loud. It was a wild way to go out. My voice completely gave up on the last line of the last song - I could only rasp into the microphone, hanging on ’til the bitter end!

Nine Stories by J.D. Salinger - I was given it by someone I loved when I was around 19, & for whatever reason, those stories have always stuck in my mind. There is something kind of transcendental about them - for having been written in the 40s & 50s, they somehow break out of the confines of their own slightly dated style and still feel altogether strange and otherworldly to me.

The documentary film by Sacha Gervasi ‘Anvil! The Story of Anvil’; Federico Fellini’s ‘8½’; and Ermanno Olmi’s ‘The Tree of Wooden Clogs’.

Sibylle Baier’s Colour Green. It was played to us one morning by a woman who was a bookbinder. We met her on our first US tour last year, and she let us crash at her house in Iowa City after our show. I remember hearing this record the next morning, in the sunbeams drinking coffee - it sounded like Leonard Cohen. I since tracked it down again.

The Waitakeres, where I grew up - the beaches and bush walks.

The tradition of ‘Birthday Pasta’ started by my friend Emily - it’s when the host makes a big pot of spaghetti, and everyone else brings one topping - like olives or cheese or sauce - and so you get a different surprise each time, and it always turns out pretty good. It’s sort of like a novelty, much easier pot luck, and you can go as simple (parsley) or as fancy (fresh mozzarella) as you like!

Mostly…I aim for at least an hour or two. Sometimes before bed, I realise I haven’t picked my guitar up all day - that makes me feel terrible, so I stay up later to play. I imagine it’s a bit like meditation - I always feel a hell of a lot better afterwards.

I’d hurry the hell up & record a few more albums! Also, I owe the planet a fair few trees worth of carbon, so I’d get planting…

I want to learn to play the piano - to understand the way it works, at least. I’m planning on getting some lessons in 2016. There is always going to be room for improvement in my guitar playing, too. It has been a decade since Manchester-born Palestinian singer Reem Kelani announced herself with her exceptional debut album Sprinting Gazelle, which earlier this year Elsewhere entered into its... > Read more