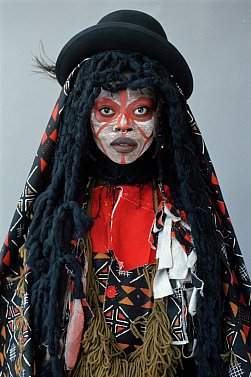 Odd though it is to say this, but when sitting and talking with Ghanaian-born global citizen and singer/dancer/multi-media artist Jojo Abot, it's not her waist-length multi-coloured dreadlocks braided with bright ribbons or equally striking clothing which takes your attention.

It is her dancing eyes – oil-dark pupils in pools of bright white – and her constantly moving hands with long painted fingernails cutting the air as she speaks with animated enthusiasm or makes a sharp point in the conversation.

At the 2018 Taranaki Womad which is often a riot of colour – in the audience sometimes more than on the stage – Abot manages to stand out like some splashy Jackson Pollock-cum-hip priestess on heels.

She is energy and the colour spectrum personified, distilled down to a tiny frame (which looks much larger and more imposing on stage) and wrapped in socio-political smarts. She'll ask as many questions as she fends.

So let's talk about colour then. When she was a child was she always drawn to colour?
“I'm from Ghana, you'd needn't ask that question,” she laughs and our conversation turns to clothes.

We are seated in a media area and almost without exception the local women are wearing black.

“See, now that might be part of the white aesthetic because very few times do you see [white] people bold enough to put on colour. I don't know why that is, maybe I should ask you? What is the fear of colour?"

I – dressed in jeans and wearing a bright blue Hawaiian shirt – suggest it is the unwillingness to stand out, the desire to conform, to be modest and maybe even stand-offish . . .

“Yeah,” she laughs. “That's probably it. It is some people wanting to part of that uniformity I guess, it's more comfortable.”

The digressive conversation turns to European countries and Scandinavia where, particularly in the latter, people are more conformist in their attire and attitudes . . . but in Germany there are obvious pockets where Europeans dress much more colourfully.

“Berlin is a lot more exciting like that, Berlin is a lot more multi-cultural in certain hubs where Sweden, for example, is trying to deal with this third culture situation. When I went there I felt much more separation, but in Berlin I experienced the diversity almost right away.”

Abot is an observant traveller who has spent time in South Africa, Kenya, across Europe and considerable time in the United States.

She takes her art, music and performances to these places and assimilates ideas from them. Her Womad performance is as much based on American street culture as it is on Zulu dance moves, and she delivers punchy rap and songs with electronica overloads. She is an artist who adopts and adapts across many media.

She speaks of workshop residencies in Kenya some years ago, but she does so in the airy and sometimes nonspecific language of the Western art world which she also inhabits.

“I've always been interested in bringing ideas with me to echo my existence, I didn't want to have to justify my existence in the sense that if there are others like me it allows us to echo and if you have others around you, then you can measure your growth.

“I always knew I wanted to be part of challenging the creative process on the continent because it is a new industry and a new space. And I believe art was a great way to recover the Self and retrieve identity.

“So I wanted to explore the possibilities of creating from a seemingly limited space of resources.

“So my first residency was a project and the theme was making something out of nothing but ourselves.

“The theme was using minimal tech and minimal material to create something full and creating resources within a network, and looking at ways of maximising the bare minimum. So the focus is on one's ability to manifest rather than the tools at hand.

“This demystifies this process of creation, and that is something I wanted to expand upon.” In 2017 she was the artistic director of the East Africa Soul Train (EAST) Project which held workshops and discussions in a train museum in Nairobi with creative artists from around the region and seven artists who lead masterclasses across all artistic disciplines.

“That project took 50 kids in different mediums from East Africa and added them on to 50 creatives and non-creatives from all over the world. Part of it was on the colonial train, and that was very exciting.

“I am particularly interested in learning so that I can transfer that, and that was part of the process as well. I also learn a lot. When you give you receive.”

Abot is linked in to a world of such projects, residencies, workshops and cross-fertilisation of the arts. She was part of the recently established incubator for artists of all disciplines and practices at the New Museum in New York.

“That happened about a year ago and I'd gotten to the point where I wanted to be in a space to manifest the other mediums like film and the other expressions that I didn't feel I had enough time to work on.

“So I packed up and moved to New York – once again I packed up, I'd been away for three months – and was going to just focus on other forms of art, the things I had been doing in bits and pieces but I really wanted to manifest in a larger scale.

“I decided to put myself through a personally curated residency and in the process of this I bumped into the deputy director of the New Museum and she invited me into the space which I was interested in exploring, the interface of art and design and technology.

“That was the perfect point for me because it was the opportunity to be around other creatives who had different points of achievement and experience who could challenge my perspective and output, rather than me working in isolation.

“The programme was still trying to figure out its identity at the time so it was a great time to experiment for all of us. It has definitely informed the time and the space I had for other things.

“So I went into it thinking it would be a lot of creatives with art and color everywhere. But a lot of people were digital and into the tech, so you would see actual physical pieces of mine in the space. “In that sense you got bursts of red and gold all over the space because I was a more tactile artist.

“I think I was definitely the most colourful artist in the space because a lot of people worked on computers.

"Tech people, right?” she laughs, those long nails swiping through the air.