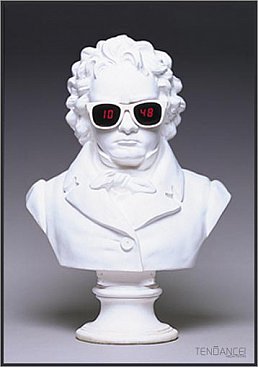 For those who have grown up within rock culture, author Hunter is the courageous advance guard into the world of classical music. A self-confessed addict of popular music who buys rock magazines such as Mojo, Uncut, and Record Collector (and NME although he hides that inside the Guardian so people don’t think he’s a paedophile), the lank-haired and sartorially unfashionable Hunter realises that now he’s in his Thirties it’s time to grow up and get into classical music.

After all -- he rationalises -- when you were a kid everyone told you it was the absolute pinnacle of human expression, no further explanation necessary.

So, wanting to like classical music as much as he likes rock, Hunter goes cold-turkey on pop and rock and throws himself headlong and chronologically into the world of classical music.

He starts with Gregorian chants and the music of Hildegard of Bingen (“a psychedelic, visionary nun”) whose life he briefly outlines with mordant wit and whose German monastery he visits, a trip that inspires many pilgrimages he undertakes, all with typically amusing results.

Hunter’s journey into classical music is largely hilarious: he and his mate Owen go to Rome to hear opera in situ and get horribly drunk; and he explores the songs of Dowland which he considers “some of the most depressing, godforsaken songs in the entire history of music” (and he’s heard Joy Division, Morrissey and Leonard Cohen).

He undertakes Wagner’s Ring Cycle in one sitting starting at 9am while keeping a log of his impressions (“10.30: An embittered dwarf joins the tedious hollering Rhinemaidens . . . Surely all we need now is a ring to appear from somewhere and we can all go home happy and not get too caught up in the rest?”)

It would be wrong however to characterise this laugh-out-loud voyage of discovery -- subtitled Or How I Learned to Stop Worrying and Love Handel, doubtless a deliberate error given the “Amadeus” of the title -- as simply a sometimes satirical look at the self-congratulatory world of classical music. 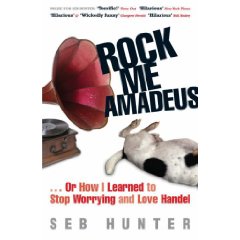 It is certainly that -- his visit to Classical FM and comparison of classical music monthlies confirms it -- but he also finds much music which surprises and delights him.

That doesn’t stop him observing of Il Divo they are “four vain, pretentious hunks. Just looking at their photo makes you want to punch them”.

With an oddball mother and reclusive stepfather, a long-suffering wife in the wings, and mates like the boozy Owen, this also comes with an amusing cast of supporting players.

But it is the iconoclastic Hunter who is centre-stage and sometimes loving it, right up until atonalism, and Stravinsky and Schoenberg, “two bald and dismal men whose photographs always imply rain and the smell of ink, [and who] dismantled 500 years worth of steady progression”.

Very funny -- but also unexpectedly insightful, right down to Schumann being the Clapton of his day.