Music writer Marcus is so well ensconced in the pantheon of great rock writers that his books are universally hailed on publication.

But this one -- a series of essays on Morrison's music which, confusingly, comes in the same cover photo as another similar Morrison book and appears in the US and UK entitled When That Rough God Goes Riding -- will be more frustrating than illuminating for most. And even hardcore Morrison followers will be irritated at the constant reference to material that appears on bootlegs or from hard-to-find radio broadcasts. 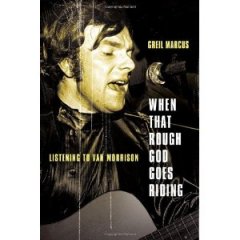 Starting with Them's single Mystic Eyes and identifying a mysterious, ineffable "yarragh" quality in Morrison which goes beyond human expression, Marcus hop-skips his way through a couple of dozen Morrision songs ending with a track from Morrison's excellent but largely overlooked Keep it Simple album from '08.

Most of the albums from 1980 to mid-Nineties are skimmed over lightly ("the singing was so characterless and the sax-and-trtupet ensemble playing so faceless that the mention of a famous name became and event") and that seems peculiar given the fine focus he uses elsewhere. Nothing to be said for anything from Enlightenment?

And he barely lights on anything on Hymns to the Silence other than Take Me Back which he links to its use in the film Georgia (starring Jennifer Jason Leigh). He is almost dismissive of the gorgeous On Hyndford Street off the same albuum.

As always with Marcus it is the digressions which make his essays interesting (some are academic and political and rather removed from the guts of Morrison's rock'n'roll and soul however) but unlike his excellent book on Dylan's Like a Rolling Stone, this collection feels lacking in focus (other than the forced "yarragh") and seriously in need of a questioning editor.

But Marcus has esablished his rep with Great Tomes (the acclaimed but barely readable Lipstick Traces, punk as seen from the dean's office) and his unearething of the subtexts and social contexts of early rock'n'roll.

But with this one . . . there's probably no substitute for listening carefully to Astral Weeks, Hymns to the Silence or maybe even going back to one of those ignored Eighties albums.

For another and better view of Morrison, try here for reference to Johnny Rogan's book No Surrender.

Amazing – I am now listening to the sample Van Morrison word song – Hyndford Street – I couldn’t believe it when I heard about listening to Radio Luxembourg – that was the only station we could get outside of King Country 1512 back in the early 70’s in Taumarunui - on a very old valve radio we had.

Longs since given up on Marcus's writing. Unlike you I found the book on "Like a Rolling Stone" a pile of what my father would have called "codswallap" and easily the worst book on music and perhaps worst book ever. Marcus's points are usually lost in the "oh how clever am I" and frequently so off the mark that it means when he does hit the target it seems from luck rather than deep thought and consideration.

Nice video. Spikey Van’s pension fund must need topping up! There have been other books, one complaining at length about “Common One” and it’s literary references. Lol. The best of Vans music for us fans is an ‘event horizon’ a transporter. Side 2 of “Into the music”, “Beautiful Vision” songs “Wavelength”, “No Guru” etc unsurpassable in the quiet hour. 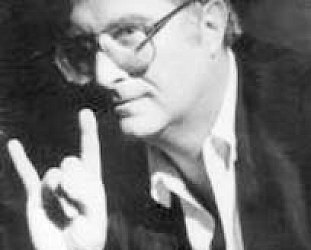 Randy Newman is a problem in popular culture, a man misplaced into the rock textbooks simply because there's nowhere else to put him. He's part of rock culture by association (his albums are... > Read more