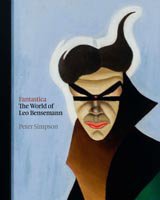 Shortly after Leo Bensemann's death in January 1986, Dennis Donovan wrote a tribute to him in Landfall, the magazine which the artist and graphic designer had long been associated with, and which he also edited for a period.

Donovan's tribute was generous (“more than a genius – he was also a scholar, a learned man”) but focused only on Bensemann's graphic arts and his association with Caxton Press. As Peter Simpson's equally generous, handsomely presented and lavishly illustrated overview shows, there was much more to Bensemann's oeuvre (there is no more appropriate word) than his striking and confident design and illustration work for Caxton over four decades.

In undramatic and clear prose, Simpson's book is not a strict biography but rather a chronological account of Bensemann's busy life which teases out the many diverse and parallel threads of work which encompassed painting (watercolour and oils), graphic design and layout, elegantly refined ink drawings, and designs for personalised bookplates (very popular in the Thirties).

Simpson also notes while Bensemann was at the center of the vibrant Christchurch arts scene around Rita Angus, Colin McCahon, Douglas Lilburn and Lawrence Baigent – he flatted with Baigent, next door was Angus who was instrumental in having Bensemann accepted into The Group -- he was also a man apart and his work, especially his exotically and slightly erotically charged Fantastica drawings, was very much on the periphery of the emerging “regional realism” of Angus and the like.

Quite purposefully Bensemann looked to Chinese watercolours (his work is exceptionally understated), Egyptology (Angus and Bensemann painting each other as Antony and Cleopatra – although his portrait of her as Cleo makes the painter look more like a wry Richard III) and more ancient models.

Most striking was his Fantastica series, most probably done in 1936: “Fantastica with its largely medieval and Renaissance antecedents,” writes Simpson, “embodies a further element of historical remoteness. Produced at a time when most New Zealand artists were insisting on grounding their art in 'real' New Zealand, especially the rural and back-country landscape, Fantastica was an implicit challenge to emergent nationalism.” Simpson notes that Bensemann was always a man apart: he came to the Christchurch crucible of art and literature from culturally impoverished homes in Takaka and Nelson, was largely self-taught and pursued his own interests, most often out of step with prevailing styles. He drew ideas from others but his vision was his own, from the broad-faced portraits of his early years to the striking landscapes in the 80s, when landscape painting of this kind had rather fallen from favour.

When his refined bookplates were compared with the work of Aubrey Beardsley he spoke of the “difference in spirit in our works” but as Simpson astutely notes, “recognising the 'difference in spirit' . . . does not invalidate noting their similarities.”

Simpson suspects Bensemann resented the comparison “because it was superficially plausible . . . Bensemann is less febrile and insinuating, more humorous, vigorous and robust – but Beardsley is certainly one of the many colours in the palette of Bensemann's art knowledge and practice”.

Careful and discreet observations such as these are where Simpson proves the gentle but forceful interpreter and advocate for Bensemann whose work he grew up with and long admired. Simpson appears in this story too, noting when he spoke with Bensemann late in the artist's life.

His detailed examination of the Fantastica series is enlightening and when addressing the landscapes from the 60s onwards he doesn't deviate from the work before us.

Of Bensemann's personal life – suggestions of a sexual relationship with Baigent – Simpson remains circumspect: such information as there might be is locked away in Baigent's papers which won't be opened for another two decades.

At that time there may be another, more personal view of Bensemann – but it is had to imagine it could be better presented, as conveniently sized (it sits as well on a desk as it does in the lap) or one more usefully illustrated.

Simpson offers Bensemann and his work to us as one who has long been charmed, enticed and intellectually curious about this artist and his art. Always a man apart in many ways.

As Donovan noted in Landfall: “[Bensemann] did not like to be told what to do – and when to do it. He wanted to do things is own way and in his own good time. And he didn't like having to do things which really didn't interest him”

As his art bears witness, Leo Bensemann was a unique figure in New Zealand cultural history, and Peter Simpson, through cool passion and focused observation, bring not only the artist and his work, but that changing social milieu, to life in these beautifully presented pages.

Interested in more along these lines? Then look here and here.