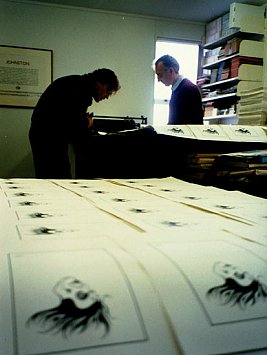 As these two slim, hand-printed, limited edition volumes confirm, the necessaries of the poetic writer are observation and considered contemplation, and the words are vehicles which realise them. And for the photographer, close observation and an eye that edits intuitively come before the shutter opens and closes.

Writer, poet and curator O'Brien has had a two decade-long association with London-based photographer Mahr, most recently when he was working on his insightful series of essays about her late husband, the expat New Zealand artist Graham Percy, in his excellent book A Micronaut in the Wide World. 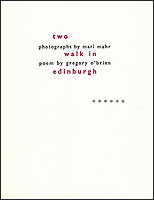 Their Two Walk in Edinburgh has eight of her black'n'white photographs taken during a visit to the city with Percy when he was ailing. They are beautifully printed alongside short poems and prose by O'Brien whose responses are to the images rather than Edinburgh (we glean this from the line “a city where one has never been”).

But they are more than that. That usefully inclusive but non-specific plural “we” and the more ambiguous “you” are the thematic glue here (“We knocked on the outer shell/of this world/and were finally/let in”) as O'Brien's measured words allude to the passage of time (clocks and time in three pieces, death in others) and focused moments which begin thoughts leading to considering the infinite.

“The dying are the custodians of/ the living, each/in the other's place. We are with them/as they are/with us, walking” he writes alongside Mahr's photograph of three decorative butterflies – those fragile and ephemeral creatures – fixed on a bleak block wall.

Mahr's work equally captures the fleeting (a pocket watch like a pendulum, seemingly frozen in its swing) or the closely observed (a brush on some stairs, the pages of an old book of dates and memoranda open in a breeze). Taken together the images and words act as counterpoint or complements to each other. A slim, thoughtful collection which speaks quietly.

Writer/musician Bill Direen's Devonport diary – written but also we might guess, refined, during his stay in an old house on Mt Victoria while on a CNZ Literary Fellowship last year – is more problematic.

The short entries have him initially exploring the place and space he finds himself in after years in the South Island, Paris and Berlin (the local terrain familiar to many Aucklanders so some observations are hardly resonant with insight). But there is dry humour (trouble with fire alarms, small irritations) and once he is settled his thoughts become more probing.

A turning point comes when he quotes from a 2006 notebook where he wrote of having decided 12 years previous to concentrate on short pieces which “amount to 'moments' of writing”. Ambition took him to novels but five years ago he was back at that place, as he is again on these pages of 'moments'.

Some entries come loaded with meanings, especially after that first Christchurch quake in September: “Comb the low-tide for lines that can still tell. Or whisper. Climb on slabs as the stacks and slabs topple. Climb and climb. Hear nothing as the man-made crumbles to the south. Hear nothing. And mad-made”

At other times he grapples with the writing process (“I am beginning to see what Matisse meant when he said never to repeat a line. To go over a line is to destroy it.”) or simply enjoys the changing weather, ferries on the harbour and the company of friends.

The last entry, written on the pier, reads, “Able to say, as my gaze retracts and falls upon the bannistered rail ahead of me, still as I am, before the ceaseless movement of wave, and wind . . . able to say, 'I am me, here'.”

And thereafter follows a brief, artfully distilled fiction in which a son returns from self-imposed exile, back to Devonport, to sell the family villa he grew up in “whose beauty was a wonder he dared not bruise with his touch”.

And you feel Direen has arrived also.