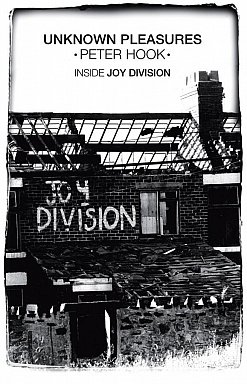 Over eight and half hours in a box of eight discs, here Joy Division bassist Peter Hook tells his own story -- and his own meat'n'potatoes version of the band's career -- which is compellingly grim, cold and a catalogue of failures, fights (with the audience, and within their early audience), hopeless recording sessions and mistake after mistake as they joined the punk excitement and, like so many, formed a band.

That they not only survived but delivered two of the finest albums in rock of the late 20th century will come as an unexpected surprise to anyone who has the time to listen to the first four discs here which are regularly punctuated by Hook telling of someone saying "fook off" and someone else saying "no, you fook off". The rivalry between Manchester and Liverpool audiences seems genuinely grounded compared with the petty schisms within Manchester itself.

School teachers, policeman, sundry civilians and fellow musicians all at various times tell Hook and his mates to "fook off". It would be hilarious if it doesn't seem so sad, mundane and shot through with English pessimism. The catalogue of bands undermining each other at soundchecks just makes you think what a sad, competitive and negative bunch of bastards most of them were.

Hook's own story is fascinating. He spent years in Jamaica as a child which his mum hated because she couldn't stand the food and missed English cuisine, wet weather and the glum streets of Salford. He inherited his mum's distaste for "foreign" food and when Joy Division were touring in Europe on the back of their successful first album -- but broke and hungry -- he still wouldn't eat anything but "English" food . . . and night after night night they were going to cheap Chinese places. He simply didn't eat and admits he hadn't tried rice -- too exotic -- until he was in his early 20s. Sad.

Out of all this, the mundanity of school and early jobs, the vagaries of a cheap van and touring to gigs where sometimes only a few would turn up (only one punter at a particular show), Hook fashions a wonderful story full of digressions. And he settles a few scores.

His admiration for schoolboy friend and guitarist Bernard Sumner, Barney to him, quickly dissipates and their recent falling out infects these reminscences written last year.

His anecdotes can be hilarious (mostly because the band were tough but utterly unworldy, imprisoned by the narrowness of their culture) and his digressions have the authenticity of a man telling his war stories over a pint.

He says the band were genuinely naive in their early flirtation with Nazi symbolism and couldn't understand why people asked them if they were sympathisers: "Nazis? Fook off, we're from Salford!"

He is however also insightful about the music (although a bit of bore later when he starts listing studio equipment and set lists), in retrospect finds the absurdity of their early career -- poorly recorded stuff, lugging 10,000 copies of their debut album back from London and into an upstairs flat, lack of money -- but of course the increasing problems of singer Ian Curtis also stalk the story.

By the end of disc seven you might start to feel uncomfortable about how often Curtis was having epileptic fits on stage but believe me, much worse is to come on the final hour.

As he has always been, Hook remains honest about how they were just lads making music (and playing the most juvenile practical jokes)  . . . and it wasn't until after Curtis' suicide on the eve of their first American tour that they thought to listen to his lyrics.

He still seems surprised by their rise, the brilliance of their music (yes, he's not ashamed to say that), leaks his story a little into the New Order years and is still amazed at how the various elements of members, music, management and production came out of them, and Manchester.

"It was either total naivety, utter stupidity, incredible foresight or a weird mix of all three."

Over eight hours is a lot of listening, but I had this in the car and, frankly, was happy when the lights didn't change in my favour. It is compellingly grim and of course tragic, but often hilarious.