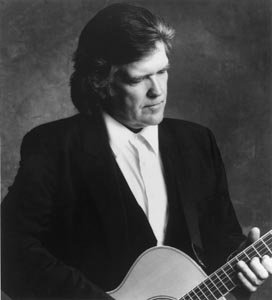 In a way it almost doesn’t matter if you don’t know who Guy Clark is -- Bono and the rest of U2 do.

Not only do they attend his concerts (and a month ago, when Clark was in Dublin for a television show, they dropped by there too), but the Irish stadium rockers have signed this quiet singer/songwriter from Nashville to a distribution deal with their newly established Mother record label.

Lyle Lovett knows Clark as well. In fact, Clark was instrumental in getting Lovett his record deal.

So even if you haven’t heard of him, a whole heap of people from Emmylou Harris, Rosanne Cash and Rodney Crowell (all of whom appear on his new Old Friends album) through to Jerry Jeff Walker (who had a hit with Clark's L. A. Freeway) and Johnny Cash (he picked up Texas 1947) - they all know of him.

Maybe it’s about time you tuned in?

Like Butch Hancock and Townes Van Zandt, Clark is an out-of-the-mainstream kind of singer/songwriter almost too self-effacing for his own good.

Speaking from Sydney, Clark is as economic in speech as he is in his lyrics.

Of his role in getting Lovett signed, all he will say is: “I played his tapes for a lot of people and finally found the right guy. I get a lot of tapes from people.”

When it comes to saying what he has been up to in the last five years since his previous album, Better Days, he plays it pretty close to the chest.

“I’ve been mostly just writing songs and doin’ gigs. I play all I want to and I need a combination of playing and writing. I don’t have any reason to write unless I’m going to play -- and no reason to play unless I’ve written new songs for the folks. I have a nice balance between the two.”

Clearly, Clark is not a man to waste anybody’s time, and time spent with the Old Friends album is not time wasted.

A collection of bare-to-the-bone song, the album is sparely produced by Clark (who is also no slouch with oil painting, if his cover art is any indication) and a deliberate move away from a more full sound as on his earlier South Coast of Texas.

“It’s hard to go back because what is, is what is,” he says about this change of style. “I would have liked to have made those earlier albums more sparse, more like this one. I like this sound better -- it also makes things more intense, and that’s the whole point.”

The songs are certainly that.

Immigrant Eyes is an immediate stand-out as Clark reflects on the immigrants to America swarming through Ellis Island. It also includes a killer of a line to pull the listener up short just when it is sounding a little too romantic.

“The guy I wrote that with, Roger Murrah, and I actually wrote it for a mutual friend as a gift. We all have, maybe not grand-parents, but maybe great-great-great-grandparents who were immigrants so that song is true somewhere down the line.”

The truth has always been Clark's currency -- “I learned a long time ago you have to write about what you know, and those songs are the ones that ring truest, and truth is stranger than fiction” – and a strong autobiographical strain runs through his work.

Born in Texas 46 years ago, Clark spent much of his childhood living with his grandmother in a seedy hotel in Montana. It was when he moved to Houston, Texas to work in television he met Jeff Walker and Townes Van Zandt.

By the early Seventies he was in Austin, the hub of an alternative country sound, and although loath to be described as a country singer, country musicians like Walker, Ricky Scaggs and Johnny Cash have all covered his material And there has been plenty to cover even though his album output stands at only six.

As the Dallas Times Herald pointed all out on the release of Better Days, “He doesn't write songs, he writes standards”.

And Better Days was picked as the top country album of 1983 by Britain's rock magazine NME.

Among the standout new songs on Old Friends is a Joe Ely track, The Indian Cowboy, a curious narrative which speaks of the fragile line between life and death but opens with the lines, “If you ever go out to the circus, where the Wallendas walk on the wire . . . .”

“Joe was one of few guys I know who actually left home and join the circus,” says Clark. “He was a stock-handler for the Ringling Brothers and Indian Cowboy was song he put together about that.”

Despite the intensity of these new songs and earlier material like his classic Randell Knife – a narrative of a boy a his father and the ties that bind which he wrote after the death of his father – Clark is by no means a down kind of guy.

Texas Cooking, Homegrown Tomatoes, A Nickel For the Fiddler and other earlier songs have a tail-kicking cheerfulness that give the lie to the perception of him as a serious and cheerless singer.

The new album even includes a track called Heavy Metal, but it's about “dancing with the widow-maker”, a “big ol' D-10 Caterpillar, 175,000 pounds of steel”.

“Everybody has had that experience of something so powerful they become mesmerised by it and for some reason mankind has always been fascinated by pushing dirt around,” says Clark by way of explanation. “That song was an idea for some existential statement on pushing dirt around.”

And then there is the final track on the album, the wry Doctor God Doctor.

It tells of going to the doctor in a state of complete emotional breakdown. And the doctor's advice? 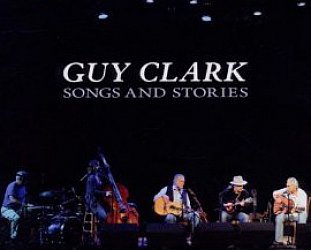 Although the smart money would have been against his longevity, here is the road-worn troubadour Guy Clark -- 70 in November 2011 -- working his way through exactly what it says on the box, singing... > Read more