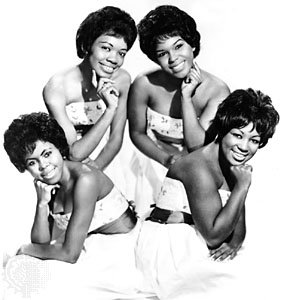 Even in a very long list of great groups there will be omissions. And today, despite constant reissue programmes, repackaging and a trawling of the backwaters of pop music's past, there can still be amnesia when it comes to some of the most important groups of an era.

The Shirelles, for example, have gone woefully overlooked given how many hits they sprang, how they defined a sound and a period, and for their cultural significance.

In 1960 with their version of the Carole King/Gerry Goffin song Will You Love Me Tomorrow, they became the first black American all-female group to top the US pop charts . . . no mean feat in itself, but consider the content of the song: in a time of conservative sexual mores here was a piece which raised the issue of sex before marriage, the consequences of it, and the doubts a young woman had.

But that was just one of a string of hits they enjoyed in a short period when their songs came  to exemplify the "girl group" sound.

The Shirelles -- originally Doris Coley, Micki Harris, Beverly Lee and Shirley Owens from a high school in New Jersey -- formed in the late Fifties and although their career was effectively over by the mid Sixties, they racked up an impressive number of influential songs.

Among their hits or key songs were the rather inane original I Met Him on a Monday, Dedicated to the One I Love (later covered by the Mamas and the Papas), Tonight's the Night, the aching Thing of the Past, Mama Said and Baby It's You (the Bacharach-David penned song which the Beatles covered after hearing the Shirelles version),

The young Beatles were particular fans of the the Shirelles and also performed and covered Boys (another Luther Dixon and Wes Farrell composition for the Shirelles) which was on the flipside of the Will You Love Me Tomorrow single. Although to a great extent the Shirelles' career was undone by the arrival of the Beatles (who also covered the Cookies' Chains, the Donays' Devil in His Heart and the Marvelettes' number one Motown hit Please Mr Postman) and the subsequent British Invasion, they were also a victim of their own popularity in that their sound spawned innumerable imitators (lotsa girl groups with names ending in -elles).

But a new triple CD set She's So Fine: The Rise of the Girl groups (Fantastic Voyage, through Southbound in New Zealand) accords them 14 out of the 95 tracks . . . although the Chantels (six songs) get the cover shot.

This collection -- which includes the originals of those songs the Beatles covered -- starts in '55 and closes with the Chiffons in '63, and the Shirelles' nearest rivals for eartime are the Crystals (He's a Rebel. Yes!) with seven songs.

Even in a set which includes Etta James and the Peaches, the Poni-Tails, Shelley Fabares (the soft-pop of Johnny Angel), Little Eva and the young Betty Lavette (the latter crop a "group"?), there are some big names absent due to licencing: no classic Ronettes or Supremes which is a shame (the latter with the early Your Heart Belongs to Me and Let Me Go the Right Way), but also no Reparata and the Delrons.

Those are gaps wich can be plugged via other collections but this is a very deep drift-net trawl of the genre where songs about cheating boys, mama's advice (sometimes heeded, sometimes not) and weepy love songs sit alongside uptempo handclap pop classics, and fending off the boy's advances (What Kind of Girl Do You Think I Am by the Charmaines)

So there's a proto-feminism here alongside what perhaps passes for the opposite (I Want a Boy by Ronnie and the Relatives, who were the early Ronettes).

There's also the terrific I Don't Like It Like That by the Bobbettes which was an answer to Chris Kenner's hit I Like It Like That, the yearning 'Til by the Angels (lovely orchestration), early work by Phil Spector (the Crystals' Oh Yeah, Maybe Baby), the light-speed urgency of I Sold My Heart to the Junkman by the Blue Belles (we should ask the great Genya Ravan about this one), Little Eva's terrific Keep Your Hands Off My Baby (a Lennon favourite in Hamburg/Liverpool days), Tell Him by the Exciters, Toni Fisher's The Big Hurt (the first use of phasing in a pop song?) . . .

Interestingly most of these girl groups songs were written by men, the liner notes here are by a man, the compilation was pulled together by a man . . . and  . . . I'm writing about it.

But, my gender disadvantage aside, this is not just wonderful music, but it was influential: You think Lennon thought up the title Cry Baby Cry or McCartney that of PS I Love You which also borrows from the Shirelles' Soldier Boy? Think again.

And it ends with the Chiffons' He's So Fine which was influential in its own way. Just ask George Harrison.

He had to go to court when it was alleged he had lifted its key chords for My Sweet Lord.

Much more influential than their small place as disposable pop in the rock history books suggests. THE DURUTTI COLUMN CONSIDERED (2018): Not exactly living the life of Reilly

For most people the punk period of the late Seventies in Britain was an exciting – but short – time. As Mark E Smith of the Fall put it bluntly in his memoir-cum-rant Renegade: The... > Read more