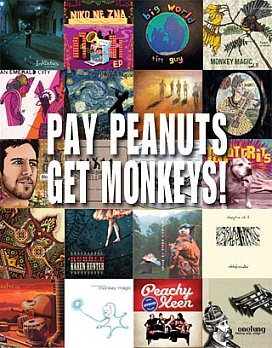 Celebrating its 10th anniversary under the appealing banner "Pay Peanuts, Get Monkeys!", the Auckland-based label Monkey Records is offering more than a dozen albums, a few EPs and some of its compilations at enticingly low prices (CDs are $15, EPs $10, the CD/DVD collection Monkey Magic Vol II at $20)

Elsewhere has a soft spot in its heart for Monkey which has been diligently recording everything from spaced-out ambient music and electronica (Sleepytime, Onelung) to indie.rock (Rene-Louise Carafice) and neo-folk.

This is the label which has brought you the charming pop of Tim Guy, the gypsy rock of the Benka Boradovosky Bordello Band and the intimate folk pop of Bond Street Bridge and the Broken Heartbreakers. And world music by the short-lived Ishta, one of whom went on to An Emerald City whose self-titled debut EP also came through the good offices of Monkey.

Releasing music through independent channels is always challenging but Monkey kept it up and also embraced the new times by offering regular free downloads. Right now their catalogue stands at an impressive 37 releases (distributed here and overseas) in many different genres.

But the reason they are here is because of the Pay Peanuts Get Monkeys! promotion, and given how well many of these artists have been reviewed at Elsewhere (and elsewhere) that qualifies it for The Bargain Buy of the moment.

You can see the full list of Pay-Peanuts CDs and EPs -- and buy them direct from Monkey -- here.

For others in our regular Bargain Buy recommendations go here. 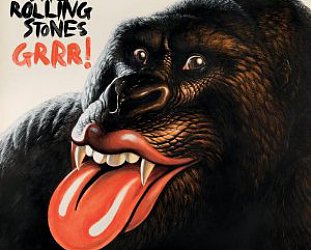