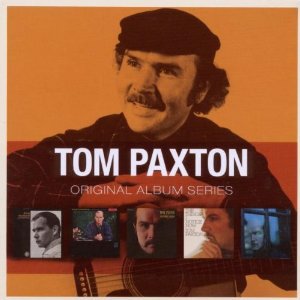 In the late Seventies, Tom Paxton was still appearing in rock encyclopedias. It was a time when rock was still close enough to some of its folk roots (post-Dylan) for him to still be relevant.

These days Paxton -- now in his early 70s and still performing -- may seem just a footnote in rock (usually mentioned in passing with regard to Dylan's folk years in Greenwich Village) and of course his political satire, which he continues to write, has a short shelf life as the reference points fade into history.

Yet he also wrote beautiful ballads which are worth rediscovering for their folk-poetry.

That alone is testament to his talent.

Five of Paxton's six Elektra albums -- not Ain't That News from '65 -- are pulled together in the Original Album Series in reproduction sleeves (the first two with liner notes explaining the rationale behind the song).

The various talking blues songs in the Guthrie tradition (which Dylan briefly explored) have dated and, as mentioned, as have some of those about specific political events.

But Paxton also wrote songs which were touched by Appalachian folk and folk-blues, those which had probing social comment, murder ballads and beautifully simple love ballads.

And kid's songs like Goin' to the Zoo made famous by Julie Felix.

Over the five albums you hear him moving from being a solo perfomer to working with small and sypathetic groups of musicians.

Paxton's songs have been covered by literally dozens of musicians so it is likely that even if you don't know his name there will be some songs here which sound familiar.

And Tom Paxton had a fine, clear voice.

And with five albums for $20 from JB Hi-Fi stores here, that makes this another excellent Bargain Buy.