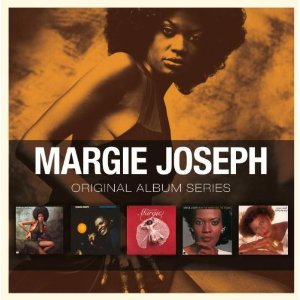 The point of the on-going weekly Bargain Buy suggestion is not just to direct readers to fine music going cheap, but to also encourage you to take a chance on an unknown or only vaguely familiar name because the album(s) recommended are . . . yes, cheap.

A perfect example is this five CD set by Margie Joseph out of Mississippi whose pedigree was impeccable. She grew up on the church, did some demos at Muscle Shoals and got signed to Okeh then Volt, and finally made it to Atlantic where Arif Mardin produced her.

Doubtless he heard in her what many others had, the deep soulful spirit of an Aretha Franklin, but also someone in tune with the more funky (and yes, sometimes disco-styled) sound of the early Seventies.

On her Atlantic debut she covered material by Al Green (Let's Stay Together) and Dolly Parton (Touch Your Woman), and the band included Cornell Dupree, Hugh McCracken, Richard Tee, Bernard Purdie and other hot session players. She was moving in a refined circle.

Ironically, given her soul/r'n'b chops, her biggest hit was a cover of McCartney's My Love on the follow-up album Sweet Surrender where she also gave Stevie Wonder's To Know You is To Love You and Bread's Baby I'm A Want You her special treatment.

Mardin produced one more album for her -- the career high of Margie in '74 -- before Lamont Dozier came in for Hear The Words; Feel the Feeling two years later.

All these albums plus Feeling My Way ('78) have been parcelled up on replica covers as part of the excllent Original Album Series and at just $20 from JB Hi-Fi stores (here) that is one fine Bargain Buy.

If the name Margie Joseph is new to you, it'll cost you about 38 cents a song to discover a woman who could pull together soul and funk, a little dance and a lot of feeling in the Seventies.

I call that a bargain.

Thoroughly agree about Margie. These mid 70s Atlantic albums are a big improvement on her two early 70s LPs on Stax. Through the five LPs, there is a slight drop off each time but I'm especially fond of the rootsy one with so many songs by Paul Kelly - the black R&B Paul Kelly, not the Australian. She always had great players too.