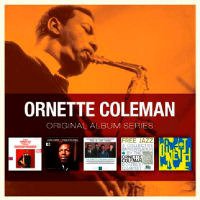 The great saxophonist/composer Ornette Coleman never seems to have been in any doubt about how he might influence the course of music: the title of his first album was The Shape of Jazz to Come (an Essential Elsewhere album here) and that was followed by Change of the Century.

Then there was the bald assertion of This is Our Music, his ground-beaking double-quartet recordings under the title Free Jazz, and then the exclamation mark inclusive Ornette! just to re-enforce the surprises he wrought on the world of jazz (and beyond) in just 28 months from October 1959.

Few artists in any genre had marked out their territory with such speed, confidence and influence, and although most jazz listeners and critics spent years and sometimes decades coming to terms with how he had redrawn the map, Coleman just kept ploughing forward into soundtracks, orchestrated works, recording with artists as diverse as the Master Musicians of Jajouka and Jerry Garcia, and writing for dance productions, being considered a style icon . . .

Coming to Coleman's early work these days is much easier than it must have been at the time. The landscape has changed so much that his work sounds less discordant and demanding than it did at a time when - in the same year as The Shape of Jazz to Come -- Miles Davis was offering Kind of Blue and Dave Brubeck's Take Five was being whistled in the street.

Elsewhere has a considerable number of articles about, and an interview with, Ornette Coleman (start here) so we needn't go over familar ground.

Just to note that those first five albums are now packaged up for just $20 at JB Hi-Fi stores here.

And that means this once revolutionary music is this week's Bargain Buy.