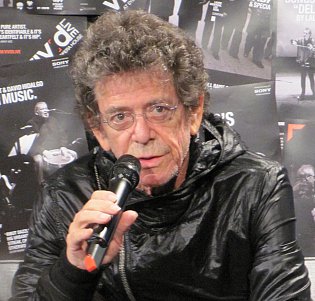 How strange to live in a world without Lou Reed. Not that we chatted often -- indeed never -- but it was always good to know that Lou was out there somewhere being irritable about something.

In the days to come we will doubtless hear how, behind it all, he was a warm, caring, sensitive and gentle soul. And he doubtless was.

But Elsewhere's sole encounter with him seemed typical of his relationship with the wider world beyond a few intimates where his real self perhaps shone. It was in Sydney a few years back and he bluntly corrected me at a press conference when I directed a question to his wife Laurie Anderson. (I wasn't wrong in fact, but that's neither here nor there).

That anecdote, with a punchline worth reading on to, is here.

Already the obituaries are talking of those influential years with Velvet Underground and rightly so. As Brian Eno once observed, “I knew that they were going to be one of the most interesting groups and that there would be a time when it wouldn’t be the Beatles up there and then all these other groups down there.

VU have long had their place in the pantheon of music assured (and you can get their first two albums as a Bargain Buy if you look around, see here).

But Reed's solo career -- so long it would invariably be uneven -- is being less discussed in obits, aside from those early years when he took that walk on the wild side.

So simply as a reader servive, Elsewhere throws the spotlight on the bargain buy reissues of many of Reed's solo albums in the Original Classic Album Series here and here. There is also a third set in that series which includes his self-titled album, Transformer, Berlin, Sally Can't Dance and Coney Island Baby.

So if you forego coffees and a bottle of wine for a week or two you can pick up 15 of Reed's solo albums, no trouble. There is a lot of listening across those records.

Lou Reed has been extensively covered at Elsewhere (you could start here) and so has Velvet Underground (here).

He may have been pugnacious, belligerent and never in doubt about his own genius, but he could also be funny, droll and a genius.

The world is that little bit more empty and poorer without him.

Yeah, so many great albums over the years. I had THE BELLS and STREET HASSLE on either side of a BASF tape at high school. They were total albums, symphonies. And then there was BERLIN, and the great concert movie. Even on the patchy albums there were still killer songs - The Day John Kennedy died. And that black black humour - Don't forget, hire a vet, he hasn't had that much fun yet...he's gone but the songs will always live on.

What a great clip of a great song to accompany the article. And it seems to represent the Reed as we knew him - moments of fragility, vulnerability and beauty in both lyric and music then within a split second the distortion and discord is ramped up to beyond 10. He was given extraordinary latitude to do what he wanted and it is a legacy like no other. Seeing another late great musician beside him (Robert Quine) also reminds us that he was reasonably astute with the choice of whoever he played with.

Rock and Roll Animal Live album was one of my Favourites Sweet Jane etc Then seeing Him at the Auckland Town Hall Twice During that Era was Awesome.

In the 1970's my boyfriend and I were given free tickets to see a Lou Reed concert in Dunedin, as a friend was involved in some way. It was the only Reed concert I ever saw, and it was memorable by being rather lifeless and not being at all memorable. Was it because of my music taste of the era, which didn't include Reed - don't think so - I enjoy a good concert no matter who. I do remember being glad that we didn't have to pay. I'm sure he's done some awesome concerts - good old Dunners just wasn't one of them. No complaints - I've had the immense pleasure of some awesome concerts over the years.