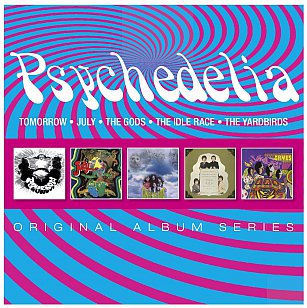 For many people the golden era of psychedelic music was before the drugs kicked in. There was that period from late '65 through to maybe mid '68 where many bands retained a pop economy and allowed only the virtuosi guitarists to spin out those long solos.

Bands like the Small Faces and the Move broached the psychedelic era with caution in Britain while the Blues Magoos, Jefferson Airplane and Moby Grape in the US also kept things at single-length but managed to pack a lot of aural information into fewer than four minutes.

Hell, if the Beatles could do it -- I am the Walrus is only four and half minutes, and that's one of their long ones - then so could they.

Of course in Britain the early psychedelic music often consisted of little more than backwards guitar, some splashes of sitar for exotic colour, harpsichord and descending cello, lyrics about flowers and fields or "the colours of my mind" and sometimes, in that typical British whimsy, vocals which affected the voice of a stuffy aristocrat or mock Cockney.

There was also the idea that Britain was conservative and uptight (it was) and that the 9-to-5 was akin to a waking death. And singing about a disturbed but hip-tripped child (bicycles, toys, soldiers, teddy bears) was prevalent.

This five CD set brings together five different bands from the late Sixties -- Tomorrow, July, The Idle Race, the Gods and the Jimmy Page-era Yardbirds -- and for sure they frequently have many of those distinctive traits.

Tomorrow manage to tick nearly all those boxes and were an interesting band, in their ranks were Keith West (yep, the Excerpt From a Teenage Opera guy), drummer Twink (later to join the Pretty Things and form Pink Fairies), guitarist Steve Howe (later of Yes) and John Wood.

Their hits - both on this album -- were My White Bicycle and Revolution, the latter not the Beatles' song, although on the album they include a faithful and therefore rather pointless cover of Strawberry Fields Forever . . .  and one of their engineers was Geoff Emerick who was doing the same job for the Beatles.

July only lasted for this one album and it's a cracker which has the whimsy (My Clown, the nautical Jolly Mary) but is mostly notable for its widescreen sound, exciting guitar work and tripped-out production. They also get in 12 songs in 37 minutes and most are dense with effects on the vocals and a real sense of weed-meets-acid mind-bending. It's a headphones gem.

The Idle Race had in their ranks Jeff Lynne before his ELO years and their loosely conceptiual album The Birthday Party here shows how musically ambitious he was even then. He wrote just about everything and also produced the album. There is that wonky whimsy here of course (I Like My Toys, Don't Put Your Boys in the Army) but also delightful wee songs (Morning Sunshine) and some real pre-ELO orchestrated material (Follow Me Follow). Interesting, but a minor entry pulled back by stuff like Sitting in My Tree which sounds like a bad Eurovision Song Contest entry.

The Gods also had members who went on to other things: bassist John Glascock was in Toe Fat, Chicken Shack and Jethro Tull before his death in '79; drummer Lee Kerslake went on to Uriah Heep and Ozzy Osbourne bands; and guitarist Ken Hensley (who formed the band with Mick Taylor later of Mayall's Bluebreakers and the Stones) formed Uriah Heep and has had a long solo and collaborative career.

Their Genesis debut album here is often big-hearted pop (Candles Getting Shorter, You'e My Life), chunky rock (the riffery and Hendrix/Cream-like Misleading Colours) as much as exploratory psychedelia (I Never Knew, Looking Glass which sounds influenced by the Beach Boys in places.) Hensley's organ playing gave them a distinctive edge and this a pleasant (re)discovery.

The Yardbirds' Little Games found the five-piece down to a quartet with Jimmy Page stepping out front after the departure of Jeff Beck (they'd briefly shared dual lead duties but that was never going to work). In fact the album was pulled together from quick sessions which included contributions by Stones pianist Ian Stewart and bassist John Paul Jones.

But it is mostly Page's show and his searing blues-based guitar lines make the single Little Games and the rocking Smile on Me the standouts.

He also contributed the acoustic White Summer which anticipated Black Mountain Side on the first Led Zeppelin album, and the vaguely Middle Eastern instrumental Glimpses. In retrospect you could almost hear some of this a dress-rehearsal for what would soon come. After all, in their closing overs as the New Yardbirds they morphed into Led Zeppelin.

But overall here's a well-priced primer on the sound of British pop and rock bands nudging their way into psychedelic music in the late Sixties, and sometimes -- July especially -- pulling it off extremely well.

At just $20 at JB Hi-Fi stores here this is certainly a Bargain Buy.