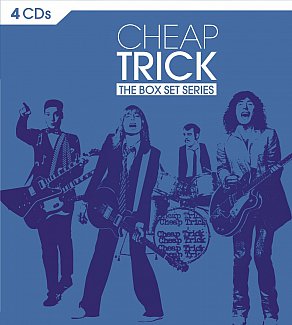 Elsewhere is on record as saying one of the most memorable and exciting rock concerts in our opinion was Cheap Trick at the Auckland Town Hall in '79 when they were at the top of their fame.

They had three great albums behind them, the terrific Live at Budokan and their new studio album Dream Police burning in the present and a future of power-pop mixed with a tongue-in-cheek attitude (if not downright cynicism) ahead.

The old hall literally shook and the audience, warned by management not to get out of the seats or the plug would be pulled, rose in unison when CT guitarist Rick Neilsen gave a wave of his hand.

And their music matched the mood of pop liberation as they referred to the recent past in songs like ELO Kiddies (with its glam rock riffery) and He's a Whore (sort of a scabrous Lennon '64 song with a nasty twist) and of course the wonderful Surrender.

They used to cover Fats Domino's Ain't That a Shame and the Beatles' Daytripper as widescreen power-pop (both included here in live versions, the latter in the longer version included in their Sex, America, Cheap Trick box set of '90) and if the Dream Police album didn't quite match the hype it hardly mattered, it had half a dozen great CT songs on it.

Not long after they were in New Zealand Nielsen and drummer Bun E. Carlos joined Lennon for his song I'm Losing You (although that wasn't the version included on the Double Fantasy album, it appears in the Lennon Anthology box oddly enough without Nielsen's overdubbed guitar part).

That's the kind of circles they were moving in during the late Seventies/early Eighties and they recorded their All Shook Up album with Beatles' producer George Martin . . . but it was an unsuccessful departure from their established style and they suffered for it in the charts.

Only three songs from All Shook Up appear among the 41 on this four CD set.

CT had a certain bratty appeal too (check the live versions of The Ballad of TV Violence and You're All Talk Here) but when their career resurrection came with their power ballad The Flame from their '88 Lap of Luxury album -- after working through albums with producers Todd Rundgren and Jack Douglas -- much of their audience had moved on.

In recent times their star has risen again and reports from their tours are highly favourable. And seeing them live is doubtless the best way to enjoy Cheap Trick because of all the tomfoollery, wit and unabashed rock'n'roll power-pop on display.

Until that day however, this collection -- which only comes up to 1990 and includes Walk Away with Chrissie Hynde -- is certainly a very useful primer ... especially given it is just $13 at JB HiFi stores here.

And if you want those three original albums which are classics, plus a couple of others, then check out this earlier Bargain Buy.