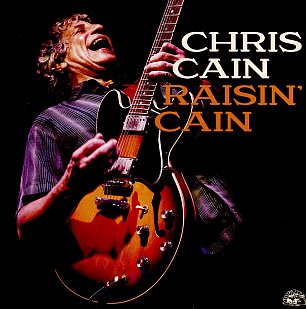 As we've previously noted, to some extent the Alligator label – which recently celebrated its 50thanniversary – picked up the legacy of Chicago's Chess Records, albeit with the hard blues sound wound up to 11.

At 65, with a dozen albums behind him and old enough to have seen Hendrix in performance, Chris Cain out of California can't be considered a “new” artist but this is his debut for Alligator and he fits right in on the roster.

Cain may be familiar to New Zealand blues audiences: he came here in 2017 to play (and work with music students) and came back with his Blues Allstars in 2019.

A year ago he released the album King of the Blues recorded with the Rodger Fox Big Band.

This album – with his band and a horn section – finds Cain in the typically leather-lung and tough guitar blues idiom with his mission statement-cum-autobiography on Born to Play (“We saw BB King and Ray Charles every time they came to play”).

This isn't all the trickle-down of the Kings (BB and Albert) because on I Don't Know Exactly What's Wrong With My Baby – which includes a smart and warm Fender Rhodes part by Greg Rahn, a MVP here – Cain sets things up with a passage somewhere between Santana and Al Di Meola.

And on Space Force right at the end he gets wah-wah funky in the manner of mid-period Stevie Wonder.

But yep, there are some hard-headed women here (Hush Money, Won't Have a Problem When I'm Gone, I Believe I Got Off Cheap), money worries (Too Many Problems), this world of struggle (Down on the Ground) and so on.

The standard blues topics ticked in the boxes . . . but Cain – who has been nominated for any number of blues awards and was once considered by Joe Bonamassa to be his favourite guitarist – pulls them all off by force of vocal personality and with a band which drives these 12 originals home behind him.

This album is available from Southbound Records in Auckland.