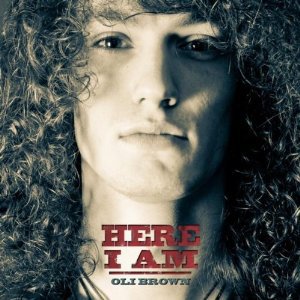 On the back of his 2010 album Heads I Win Tails You Lose, Elsewhere noted that while this young, hard-edged blues guitarist came up a little short in the originality stakes he was certainly one to watch because he delivered more than enough to be impressive.

Still only in his early 20s, Englishman Brown of course has ample room to grow but this is yet another step up in his playing (and his vocal strength is certainly raised a couple of notches) although some of his songwriting is -- and this typical in the genre -- simply a vehicle for the guitar playing.

He doesn't exactly help himself on the title track opener in which he (understandably perhaps) gets things off his chest about not trying to be "no Jimi or a Stevie, I wanna be my goddamn self, I keep fighting voices in my head". Those voices doubtless come from those who have made those comparisons (the latter slightly fair in tone if not energy, the former not at all).

Later he also has another swipe about not being bothered by what people say (Manic Bloom, ostensibly poke at a lover but sounds rather more broadly directed) and he seems to protest too much . . . because the brooding quality of that track, the low throb of All We Had to Give (real classy pop blues with radio potential in a better world) and the menacing You Can Only Blame Yourself, and especially Devil in Me (riding Hammond organ) have a taut economy which is very appealing. And don't sound remotely like Stevie Ray or Jimi.

Mostly Brown keeps things very economic (with one exception the average length is less than four minutes) and there's no fat in his guitar solos, in fact there are fewer of them than some might like.

The seven minute slow and aching ballad I Love You More Than You'll Ever Know-- very spare, strong vocal over soft organ -- lets him peel off a romantic solo, but even here it doesn't hang around.

Brown's distancing himself from those names mentioned appears to take the form of short and snappy songs rather than extended improvisation, and in that regard he's more of a pop-bluesman than someone who sounds like he wants to shake the walls of a bar or juke joint.

But you can't take anything away from his impassioned vocals and subtle playing when it happens.

Just not a real ace in the deck this time out. But a solid hand.