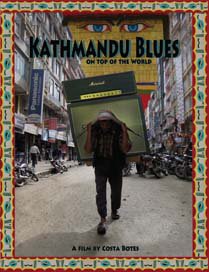 Among the amusing moments in this fly-on-the-wall, 90 minute doco about -- yes -- a blues festival in Kathmandu, are artists saying that when invited they thought it was a joke by a friend or some kind of credit card fraud scheme.

Singer-guitarist Paul Burris from the UK -- wearing Keep on Truckin' t-shirt -- says "we thought it was a scam" and that the organisers assumed because he was old enough to have been in Britain during the blues revival of the Sixties that "they think we're the real thing, they think we did actually meet Robert Johnson."

The festival may be "a contradiction in terms, a Himalaya blues festival" says one, but the musicians also speak about how royally treated there are, everyone like a headliner.

Wellington doco film-maker Costa Botes is used to working cheap and when New Zealand blues singer-guitarist Mike Garner and his two-man band from Rotorua were invited to play in '09 (they as sceptical as any), he tagged along with just a camera and a backpack.

That he got such excellent, up-close footage of players who had come from the States, the UK and beyond -- was remarkable in itself. But he also weaves in interviews, interesting footage of local people going about their daily lives, holy men and ascetics with three metre-long dreadlocks, mad traffic, animals (monkeys, rhino watching from the back of an elephant), a cremation ritual . . .

The combined effect is you get dropped into this world and have an understanding of what it must have been like for the musicians, which can be quite disconcerting ("You can only take so much," says Garner at one point. "I'm ready to go") and not a little dangerous in the traffic.

The pace here is slow and the ambience reveals itself over time, you also have to like black acoustic blues played mostly by middle-aged white men more used to performing in the corner of their local pub.

Hard to agree with Knut Reiersrud from Norway though, who says if you go way back "this was where the blues more or less came from, this part of the world". That seems to be rewriting history rather too much for local consumption -- although the Mississippi Sheiks did write Sittin' on Top of the World and that's where this is.

But he redeems himself by playing a kind of raga blues.

You don't get to see the size of the audiences at these gigs which appear to be scattered around the city -- but it looks like a splendid time was had by all and the locations for some gigs are breathtakingly exotic.

If you are planning that long overdue hiking trip in the region you might want to take time out to factor in the October blues festival.

The backdrop is spectacular.

Interested in more along these lines? Then check out this doco.

On this side of the Tasman, Ian “Molly” Meldrum probably means as much to rock aficionados as Karyn Hay means to Australians. All that might be about to change however with the... > Read more