THE EYES OF ORSON WELLES, a doco by MARK COUSINS 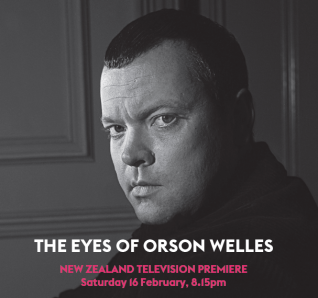 Many decades ago when taking a class in film analysis to a group of enthusiastic young people, I was at a loss as to how introduce Orson Welles, his art and work was so diverse and massive.

By chance it was made easy: I threw up an image of the older Orson on the screen and immediately a voice from the darkness said, “Hey, that's the Nashua 120 guy!”

Yes, Orson Welles did a television advertisement for a photocopy machine in the same lifetime as Citizen Kane, The Magnificent Ambersons, A Touch of Evil, The Third Man, Othello . . .

This doco however takes a journey from the present day of cellphones and colour back through black'n'white clips to discover Welles' sketchbooks, drawings and his study of art which honed his cinematic eye for perspective, odd angles, high contrast, framing and chiaroscuro.

And Irish filmmaker/narrator Mark Cousins links these with appropriate clips from films but also film of the world around us.

We go to Ann Arbor where many of Welles' drawing are held in the university archives: the coat he wore in Jane Eyre, letters, clippings and scores of his sketches . . .

Welles' third daughter Beatrice who lives near Monument Valley shows her father's work which she has: cartoons, letters with marginal drawings, caricatures of people and types . . .

There's a colourful angry oil painted after he was refused permission to come back to A Touch of Evil and his project was taken from his hands. All quite remarkable.

This lengthy – almost two hour – exploration of Welles' art away from the screen or stage is insightful and revelatory.

Welles was a man who loved Ireland which is brought to the fore by the filmmaker through faces which might have stepped off Welles' sketchbooks into the world.

At this point the visual reference to a clip Robert Flaherty's Man of Aran makes perfect sense, the young Welles was there when Flaherty was making his film.

And it was in Dublin where he invented himself in the theatre, claiming a fame he had yet to possess.

The Eyes of Orson Welles is also an autobiographical travelogue as it follows the sketchbooks of the peripatetic Welles to Essaouira in Morocco (where he would later film the opening sequence of Othello), Seville, back to the United States to appear on radio (War of the Worlds!) and create his all-black cast for the stage production of Macbeth, Citizen Kane, Brazil for his never-completed film . . . and more.

More because at this point Welles is not yet 30 and he lived another 40 years.

The film is a letter to Welles which becomes a career synopsis following the art – some of which prefigured images from films shot much later – into his life and out again.

This is an insightful doco which makes Welles' art contemporary and relevant all over again.

Orson Welles was a bluff, complex, bullish, funny, earnest Renaissance Man for whom politics and the faces of ordinary people were central to his art, however he expressed himself.

Except perhaps when he was reduced to what he called "whoring" by doing Nashua 120 and other ads for the money. 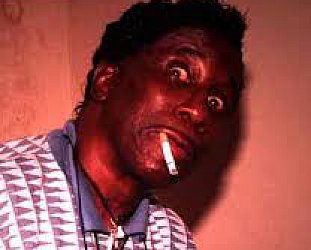 When Oasis celebrated cigarettes and alcohol on their debut album Definitely Maybe, they were onto something. These twin poles of working people are traditionally the escape from the drudgery of... > Read more