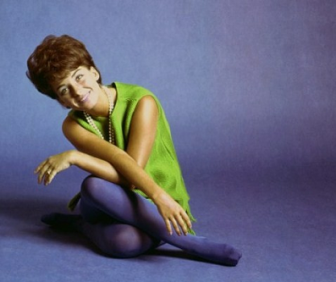 While not quite in the league of He Hit Me and It Felt Like a Kiss, this sliver of semi-innocent pop sounds very uncomfortable these days.

Poor Joanie, just wanting to get a response from the meek boyfriend ("I want a brave man, I want a cave man") and hoping for a lecture from Johnny. She wants Johnny to be the boss, but wimpy Johnny sounds like his part could be played by Gene Pitney ("backstage I'm lonely, backstage I cry") or Eden Kane ("boys cry when no one can see them").

Johnny sure wasn't the captain of the high school football team.

This was a hit for Sommers, but it was hardly typical of her style. It opens her album Joanie Sommers Sings Johnny Get Angry and Other Top Pops, but the next track is the ballad A Nightingale Sang in Berkeley Square and later she sings the MOR Theme From A Summer Place.

But there's also the poppy The Piano Boy (the boy next door just plays piano and won't play with her), and the string-soaked I Don't Want to Walk With You . . .

An odd album, but indicative of where she was in her career at the time: she was 21 and was being made over into an all-round entertainer.

She'd grown up in LA and appeared in the popular television series 77 Sunset Strip, later been on the pop-package shows Shindig and Hullabaloo, and sung a Pepsi ad -- but by the end of the Sixties -- with no hits other than the earlier One Boy and Johnny Get Angry -- she retired.

On the album there is the hopeful liner comment: "Without going through all the red-tape of an actual poll, it's a safe assumption that four out of five people in show business would guarantee you that Joanie Sommers probably has THE future of the new singers of our time."

The problem for her was right there: "people in show business".

Maybe those people should have left her alone and let her belt out teen pop of the Brenda Lee kind. She had the voice for it.

That said, she aches through the torch ballad Mean To Me very convincingly, and on Don't Pity Me had a soul-belter style so . . .

Still, Johnny Get Angry is quite something. Not every day you hear a kazoo solo, huh?