In the DVD doco accompanying the box set version of The Promise -- the songs recorded while waiting to start a new album after Born to Run -- Bruce Springsteen talks about how he was a product of Top 40 radio, those great three minute songs which set you free just for that moment in time.

And E Street Band member Steven Van Zandt later says that Springsteen could have been one of the great pop writers, the evidence being all those songs he wrote which were framed by Ben E. King/Spanish Harlem, the Brill Building, Phil Spector's hit singles for the Crystals and Ronettes, and soul music.

Gary "US" Bonds was one of those Springsteen heard on Top 40 radio, notably his Quarter to Three which was his huge hit. In 1963 Bonds headlined a tour in Britian which had the Beatles further down the bill, but -- as with Helen Shapiro and others who also topped them on early tours -- the Beatles were to be Bonds' undoing.

Radio pop of the Gary kind changed when young men with guitars arived.

Springsteen however never forgot him and in concert he would cover Bonds' songs . . . and his own material like Sherry Darling (and any number of songs on the Tracks box set) are shaved from the Quarter to Three sound.

In the late Seventies Springsteen tracked down Bonds to a roadhouse on the New Jersey turnpike where he was playing and set wheels in motion to get Bonds a record del. Springsten signed on as producer and gave Bonds some of his own songs, and Gary US Bonds had a hit with This Little Girl (see clip below), and a hit alum with Dedication which had the E Street Band in for the sessions . . . and another Springsteen favourite, Ben E King on the exceptional Springsteen-penned Your Love.

Also in the backing vocals was songwriter Ellie Greenwich who wrote (or co-wrote) such hits as Da Doo Ron Ron, Be My Baby, Then He Kissed Me, River Deep Mountain High, Leader of the Pack and . . . . well, you can look her up. 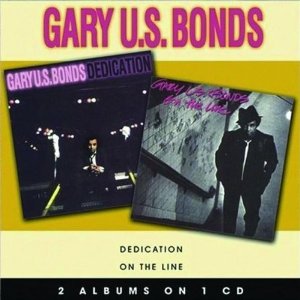 What this meant for Gary US Bonds -- at 42 -- was a late career revival and although the Springsteen-Van Zandt produced follow-up On the Line didn't quite get the traction it should have (more songs by Springsteen, the E Street Band in again) it further answered a question that had briefly troubled him.

Apparently when Bonds was in that New Jersey turnpike lounge knocking out what he called his "Holiday Inn act" he was aware of a whisper going through the crowd as someone entered the room.

He was told who it was.

But he was forced to ask, "Who the hell is Bruce Springsteen?"

This sound has never truly gone away for some of us, I caught a snippet of Paul Weller’s ‘Waking up the Nation’ on radio and one song sounded a hell of a lot like Willy De Ville, Le Chat Bleu era.

Bonds to this day has mantained a strong voice unlike Southside, who squandered his, and is part of the Jersey gang still issuing “top down and club style” records. Joe Boot and the Fabulous Winds: Rock and Roll Radio (1958)

From The Ventures (Walk Don't Run) and the Kingsmen (the garageband classic Louie Louie of '63, see clip) through Jimi Hendrix, the grunge bands (Nirvana, Mudhoiney, Pearl Jam etc) to the Posies,... > Read more