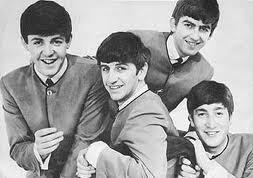 Half a century ago, the world was a very different place. Germany was divided, racial lines split South Africa and the Southern states of America, the world held its breath when the young US President JFK prevented Soviet ships from taking missiles to Cuba . . .

In music the big hits of the day were jazzman Acker Bilk's clarinet ballad Stranger on the Shore, the Tokens' The Lion Sleeps Tonight, plenty of people singing about the latest dance craze the Twist, Cliff and the Shadows with The Young Ones and Bachelor Boy, Elvis having chart singles with Good Luck Charm and Return to Sender, names like Bobby Vinton, Mike Sarne (Come Outside), Frank Ifield (I Remember You with a harmonica part), the Tornados with Telstar . . .

And the Beatles released their first single Love Me Do which scraped into the top 20 on the British charts and went ignored everywhere else.

While touring as Bruce Channel's support band, Lennon had learned harmonica from Delbert McClinton (who played it on Channel's Hey Baby hit of earlier in the year) and because he'd liked it on I Remember You.

The song may be lyrically cliched but it did have a certain "something", as their producer George Martin remarked when he'd had them audition earlier in the year.

They's already been turned down by Decca's Dick Rowe (fair enough when you listen to their session for him) but when pressed by manager Brian Epstein as to why, he uttered the verdict which will live forever, that groups with guitars were on their way out (even though he'd just signed Brian Poole and the Tremeloes).

Love Me Do -- juvenilia certainly -- announced in its own way the exact opposite.

The era of groups with guitars was on its way in.

And after Love Me Do and Please Please Me in January '63, the music world -- and Western culture -- would never be the same again.