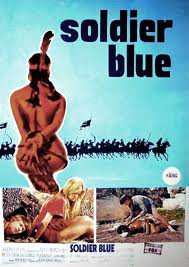 The great Buffy Sainte-Marie has appeared at Elsewhere previously for her always timely song The Big Ones Get Away, but this exceptional piece deserves to stand in its own right. Part political activism, part patriotic American anthem and a powerful plea underlining it all, Soldier Blue was the title song to a film of the same name which goes largely unseen these days.

The film -- by jobbing director Ralph Nelson from the novel Arrow in the Sun by Theodore V. Olsen -- is an account of a brutal massacre of Native Americans by a Cavalry unit and, like Sam Peckinpah's Wild Bunch of the previous year, renown for its graphic and unflinching portrayal of the violence.

The clip below makes it look a bit like a rom-com take on Butch Cassidy and the Sundance Kid, but the flm gets progressively darker and blood red.

The savagery became the film's selling point but -- given the Vietnam war was raging and the story of the My Lai massacre, American troops killing Vietnamese civilian villagers, had broken -- the political subtext didn't play well in America.

The cavalry -- traditionally portrayed as riding to the rescue -- were not the good guys but ruthless, maniacal killers wiping out women and children with blood thirsty glee. That the story was based on an actual incident only lent weight to its political impact, and it became a rallying point for the increasingly visible American Indian Movement which marched on Washington in 1971, occupied various important sites (among them Alcatraz) and brought historical injustices to light.

Sainte-Marie's powerful, often narrative, songs were right there as the soundtrack and her remarkbale voice was, if nothing else, memorable.

Soldier Blue packs in as much information and emotion as a dozen songs, and served the political, social, historic and soundtrack purpose simultaneously.

A rare one from a rare woman.

(This track appears on the four CD set of vanguard Records, see here.) 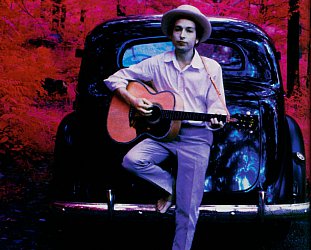 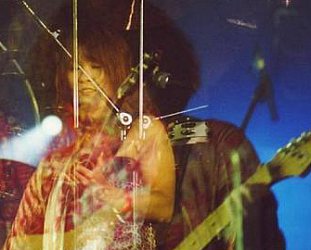