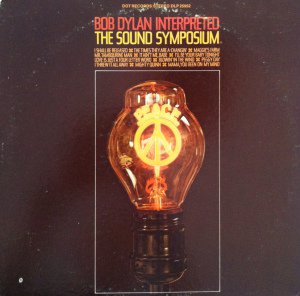 In his liner essay to the new Bob Dylan Bootleg Series collection Another Self Portrait, the writer Greil Marcus makes a disparaging comment about the string arrangement on the original version of Copper Kettle which appeared on Dylan's Self Portrait collection in 1970.

He jibes that while the song stood out on that album, the strings sounded like The  Longines Symphonette Society Does Bob Dylan.

We don't need to have heard them, we get what he means.

Dylan however has made some interesting comments about arrangements and also noted, rather tartly, in his book Chronicles that while most people turned attention on his lyrics, songwriters knew he wrote tunes as well.

True, and his songs have been subjected to many instrumental treatments . . . possibly by the Longines Symphonette Society who specialised in easy listening.

I don't have access to whatever they might have done to Dylan, but this particular track comes from an ensemble who, prior to doing the album Bob Dylan Interpreted from which this is lifted, had done the albums Paul Simon Interpreted and Contemporary Composers Interpreted (Lennon-McCartney featuring, of course).

The arrangments are by Paul Harris and the liner notes to this Dylan one say, "The Sound Symposium is fast becoming America's foremost interpreter of contemporary music. This album will tell you why".

You be the judge, but if nothing else it does prove Dylan's point. He also wrote tunes.