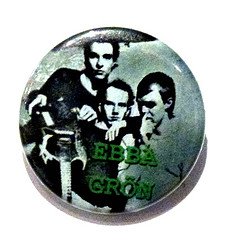 The regular postings at From the Vaults have previously picked up this punk band from Sweden and although their single Scheisse in '81 went higher on the local charts (to number three) this is perhaps the song they are most known for.

It is a furious tirade against capitalism and corporations, and they certainly seemed to be in the vanguard of something in conservative and state-controlled Sweden.

The Sex Pistols had been to Stockholm and footage of their gig shows a young crowd utterly in tune with their fury . . . so something was going on in the middle-class and working class suburbs.

Ebbe Gron, which formed in '77 as a trio but expanded to a four-piece, tapped into it.

Their first songs were anarchic and angry (their debut album We're Only In It For the Drugs is worth seeking out even if you don't speak Swedish), they covered the Clash's White Riot and attacked every Swedish institution they could, including the royal family.

Sort of, God save the Queen, she ain't no human being . . . inna Scandi-style.

This one however is especially interesting because it a fast'n'furious take on an earlier song by the Swedish prog band Bla Tagen (The Blue Train) who had also attacked the hand-in-glove relationship between the Swedish government and capitalists.

The Bla Tagen original was entitled Den ena handen vet vad den andra gör/The One Hand Knows What The Other is Doing but Ebba Gron went for the more blunt blade approach in both sound and title.

They called it more directly: The State and the Capital.

Ebba Gron dropped some of the lyrics, the folk-rock feel and the saxophone of Bla Tagen's original (see the clip) but turned up the volume and frenzy. They also opened with "hello hello" just like John Lydon would do in PiL's Rise  . . . six years later.

Oddly enough though, despite the land-speed attempt of their version of Bla Tagen's song it is actually a minute longer than the original . . . although it sure doesn't feel it as it flies by.

Ebba Gron were as short-lived as many punk bands. They folded in '83 but there were the inevitable one-off reunions and after Joe Strummer died in 2003 Mick Jones went to Sweden to play a tribute to him with a one-off re-formation of Ebba Gron.

However they didn't simply vanish.

By extending the contract of punk into more straight-ahead rock, in the Eighties three of the four were in a new outfit Imperiet which met with considerable underground/indie acclaim and played in the US and South America.

As a footnote, the bassist in Imperiet -- which called it a day in '88 -- was Christian Falk who died in 2014. He had gone on to become a very successful producer and was responsible for the Youssou N'Dour-Neneh Cherry hit 7 Seconds. 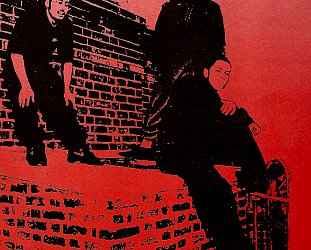 Just as Run DMC found when they hooked themselves up with a metal guitar part from Aerosmith for Walk This Way (here) -- and King Kurlee confirmed when he got Blackmore Jnr in to play the classic... > Read more