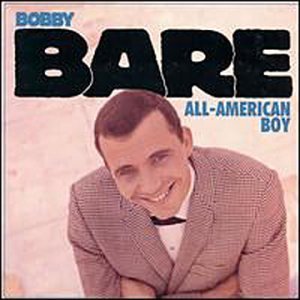 American country-rocker Bobby Bare scored an unlikely hit with All American Boy back in '58 when his demo of the song for a friend Bill Parsons was chosen by the record company over Parson's version.

Bare wrote it but Parsons got the credit, however what is of interest is how it was a kind of early run at songs which were cynical about success and fame.

Bare's song – see the clip below – was inspired by the Elvis rise to fame and his induction into the army, but you can hear prescient elements of the cynicism in So You Want to be a Rock'n'Roll Star (Byrds, Patti Smith) . . . and of course Stan Freberg's rock'n'roll parody (and Peter Sellers' mocking one too).

Dylan would have heard it at the time and it seemed to simmer away until he could take a break and reflect on his own meteoric rise to fame when, after his motorcycle accident, he holed up near Woodstock in upstate New York and started rummaging through Americana, half finished lyrics and so on with the group which became The Band.

Naturally he rewrites it and his version was always unreleased until The Bootleg Series Vol 11: The Basement Tapes Complete where this casual but lyrically considered take appeared.

It still carries the kind of morality tale with the warning about a manager (Albert Grossman would increasingly be sidelined by Dylan after he found out about certain deals Grossman had done behind his back).

In a strange twist once again Bare wasn't credited as the songwriter – who should have got co-credit given Dylan cops some lyrics from him, as well as the whole talking blues style – when Dylan copyrighted it in '73.

On the Basement Tapes Complete however Bobby Bare's name is reinstated.

We are actively promoting a link to this interesting topic on The Bob Dylan Project at:
https://thebobdylanproject.com/Song/id/26/All-American-Boy The curious thing about cocaine in popular culture is the vast majority of users (as with most drugs) had a great time, but when it comes to writing songs about it those who came out the other side... > Read more