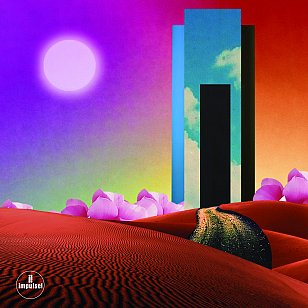 The name to note in this UK trio is saxophonist and jazz-shaman Shabaka Hutchings, the pivotal figure in the emerging new wave of British jazz who is in Sons of Kemet and Shabaka and the Ancestors.

He's a prime mover in a scene which is enjoying a renaissance (and enjoying itself in the process) with big and boisterous music, controls sometimes to the heart of the sun above a spiritual vision of Africa and jazz influences from Sun Ra and be-bop to German electronic bands and the Art Ensemble of Chicago.

The loose affiliation of acts is getting attention at the Mercury Prize and London-born/Barbados-raised Hutchings articulates the collective vision.

The Sons of Kemet album Your Queen is a Reptile which gained so much attention wasn't quite so acclaimed at Elsewhere the Ancestors album was better) but The Comet is Coming makes a fascinating statement.

The group is Hutchings who is here styled King Hutchings, drummer Betamax Killer (Max Hallett) and keyboard player/electronics Danalogue The Conqueror (Dan Leavers). . . and for just three people they can make damaging large and expansive sound.

The Afrofuturistic sound with cosmic intentions here opens slowly however with the lengthy, scene-setting wash of Because The End is Really The Beginning where widescreen synths, busy drums and cymbal clashes create a tension behind Hutching's yearning sax . . . and the constrained Birth of Creation which steadily builds in tension and intensity.

With its squelching and sometimes brittle electronics, this is music for jazz listeners as comfortable with Congotronics as Coltrane, and Can as much as Coleman on the driving Summon the Fire.

Unlike some of Kamasi Washington's impulsive, wide-reaching and expansive music which is impressive but can lose itself in the rush to embrace numerous influences, Comet – perhaps by virtue of just being a three-piece – keep things highly focused in pieces which are often short (nine songs in 45 minutes, the longest the stentorian eight minute-plus Blood of the Past with a declaimed poetic plea by Kate Tempest whose voice is processed into a robotic monochrome) and many are fewer than five minutes.

There is space-rock here too (the groove-riding Super Zodiac where Fela hitches a ride with Hawkwind, the Glass-like minimalism which underpins Astral Flying) and much more.

The Comet is Coming have created a landmark, stake in the ground and a platform simultaneously with Trust in the Lifeforce of the Deep Mystery.

Shall we take a trip?