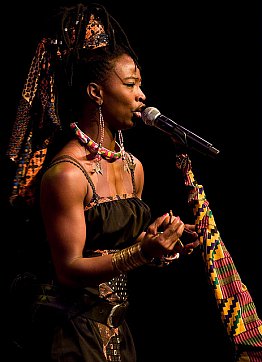 While many came over green and Irish on Saturday (St Patrick's Day), the Womad crowd typically enjoyed the bigger picture of a rainbow-hued, multicultural music festival with over 400 performers from 21 nations entertaining (and educating) under a cloudless Taranaki sky. It was a day of sunscreen, silly hats, neo-hippie interpretive dance and music from almost every corner (and sometimes a very small cranny) of the globe.

From Kashmir, Shivkumar Sharma offered the mesmerisingly meditative and metallic sound of the santoor (supporting drone from tamboura and cicadas) which also reached thrilling heights when the energy levels and tabla (drums) kicked in. And the Palestinian brothers Le Trio Joubran (playing lute-like ouds) drew a huge crowd for their music which could be as dramatic as it was plaintive and imbued with yearning. No surprise the CDs sold out after their appearance.

Not every act was as successful: Diego Guerrero and band from Spain proved something less than the sum of their parts although when the Afro-Cuban and flamenco threads came together the large crowd got the opportunity to dance, albeit briefly before it unravelled again.

Similarly Alabama 3 from Brixton in unplugged mode – tripped-out rave music mixed with non-specific politics and American country blues – drew a large and expectant audience (some only there to hear them play the theme from The Sopranos perhaps) but lost momentum with a drawn out broody piece followed by slow and soulful treatment of Joy Division's Love Will Tear Us Apart. People drifted away, because at a Womad there is always something else to see.

On the main stage Lo'Jo delivered a fine set of melancholy poetics (in largely indecipherable French), North African melodies, searing violin, hypnotic kora and pounding percussion. They were gripping, but didn't translate much beyond the audience at the front in the Bowl of Brooklands amphitheatre.

The Mahala Rai Banda from Romania suffered similarly. Despite rollicking energy one piece blurred into another.

New Zealand acts certainly held their own – Batucada Sound Machine, Groundation (with Jamaican links), the Black Seeds, the Yoots popular with their blend of singalong Maori songs and what seemed like a woozy horn section beamed in from Ratana brass bands – and although Pajama Club (Mr and Mrs Finn with sons Liam and Elroy alongside SJD) hardly seems like Womad fare, they pulled a large and appreciative crowd for their rock and pop set. The only band to play Laneway and Womad, and play Bowie's glam-rock Moonage Daydream at a world music festival?

Womads are always about the unexpected but word was out on Dobet Gnahore from the Ivory Coast who had the most enthusiastic audience of the day as she and her tight band played into the setting sun with a rare passion. By turns the handsome, dreadlocked and colourfully attired Gnahore was regal, righteously angry (about politics in Africa), breath-stopping (beautiful ballads delivered in an astonishingly powerful voice), funny (tapping an imaginary watch as the band took crowd-pleasing solos) and athletic as she danced, prowled the stage and engaged the audience. Absolute standout and the talking point of the festival, and a long queue when she was signing CDs.

And the often thrilling set by Staff Benda Bilili – was that especially incendiary piece based on the closing passages of Hendrix's version of All Along the Watchtower? Sounded like it – was so exciting even one of the musicians got out of his wheelchair and danced.

The big group from the Solomon on wooden flutes and bamboo drums tended to work much the same crowd-pleasing dance options but were certainly colourful enough.

There was a lot of dancing, perhaps a bit too much reggae as a default position and many times when an audience was hushed into awe. As when the avant-garde Korean quartet Tori Ensemble redefined the limit of the human voice and improvised a long piece which existed between natural sounds and out-there free jazz. Standing ovation much deserved.

Womads are also more than music – most diverse and edible food at any festival, hands down – and the workshops also pulled curious punters, none more than for Anda Union from Mongolia who demonstrated that peculiar art of throat singing. There are also artists in conversation and to hear the great Baaba Maal – who wowed the crowd on Friday's opening night – discuss with Nick Bollinger his childhood and formative musical influences was a real insight.

Some acts seemed to misjudge the situation however. The gamelan ensemble Wayang Kulit – New Zealand music students with shadow puppets – presented a piece which not only tried to tell a confusing story (within minutes you were asking who killed which brother and which other brother wanted to kill someone else?) but the music wasn't especially engaging.

With workshops, artists introducing food from their region (Le Trio Joubran, born to a Christian family in Israeli territory and with Israeli passports were a real comedic act but also with aching stories of the Palestinian plight from personal experience), special seating areas for those over 65, kids under 12 free with an accompanying adult, free water and good bars spaced around the large site, Womad offers fascinating music and dance from around the world and close to home.

The Taranaki air even cured the cold I'd been carrying for a week. Can't argue with that.

Got a bit overloaded 10 piece afro/soul/funk/jazz acts (with the obligatory 3 bongo players) on the main stages this year. Including Baba Maal at times I thought.

So it was the artists that nailed their own sound that stood out for me. So I totally agree that Staff Benda Bilili, and what I saw of Dobet Gnahore (really quite special) were rare standouts. But similarly I thought Mahala Rai Banda brought a distinctive sound, energy and passion which got the crowd bouncing.

But Alabama 3 were the real highlight for me because they delivered strong songs with a unique sound, look, attitude, and humour (bringing the biggest bass bombs of the festival to their “unplugged” set)! They were also the coolest cats in town. Yeah that moody piece might not have been ideal in the hot afternoon sun but it was the perfect build-up to that gorgeous version of Love Will Tear Us Apart which threw the emphasis on the melody in the verses rather than the singalong chorus and easily trumped New Order’s version of a few weeks ago. I will be singing Peace In The Valley for a few days yet!

(And was it a musical crime to put a perfectly pedestrian band behind Gurrumul’s voice? And then play a country number?)

No mention of Adam Page? Consummate musician and looping visionary. His ability to draw the crowd in with the above as well as tapping into the whole WOMAD experience swept this punter away at the Dell. At the same intimate venue, where the audience usually remains seated, anarchy broke out early in the Shogun Orchestra performance. The sounds were just too infectious to resist. Didn't see a single soul remain seated for the rest of the exuberant performance. High octane.

I missed the past few years, unavoidable life things, but heard great reports this year of the Japanese outfit Pascals. Any thoughts on them? Had a look through Amazon etc but their cds only appear to be available from Japan, not a very attractive cost option.