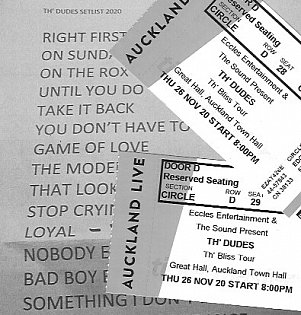 A few weeks ago at a family function I was talking with Daniel, the bass player in the Auckland rock band Racing.

We were bemoaning – among other things – the fact that somewhat vacuous soul-funk-reggae pop has such a foothold on the local scene and that there weren't as many rock bands as there once was.

And Racing are a rock band. A second generation rock band at that.

Half of their four members – singer Ed Knowles and guitarist Sven Pettersen – were in the rightly acclaimed rock'n'roll/r'n'b Checks – and Daniel Barrett was in the more expansive Sherpa. Drummer Izaac Houston came from Space Creeps, whom I don't know about.

Given their Real Dancing album spawned a few hits and they were nominated for best rock act at last year's music awards they should be better known than they are.

Maybe that'll happen now because among the other things we spoke about that day was the fact Racing were opening for Th'Dudes on their short (and much delayed) tour, then embarking on their own dates.

Daniel was enthusiastic about Th'Dudes.

Given Th'Dudes short career was well over before any of Racing were born that speaks to the enduring power and influence of their songs and stage charisma. 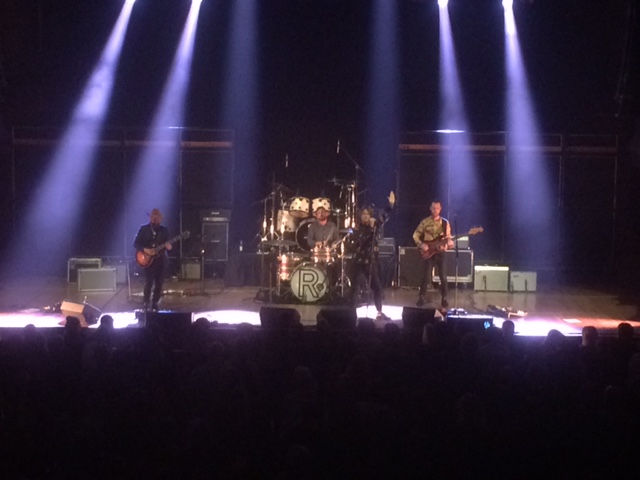 But opening for Th'Dudes and their more mature audience is no mean feat. However Racing held the large crowd with their set which roamed confidently from their powerful hard pop-rock (Motel Pool, the terrific Run Wild) and stretched out into soulful funk-rock (The Bass).

In many ways Racing are inheritors of the music which preceded them – mid-Seventies Stones (when their rock'n'roll flirted with disco and funk), INXS and yes, Th'Dudes. But when they embark on swirling psychedelic metal they are in a class of their own.

Racing: A proper rock band at a time when there aren't that many around?

That's also what someone said to me on the night just after they wound up to appreciative applause from a lot of people old enough to be their parents.

Th'Dudes were also a rock band of their era although frontman/cheerleader Peter Urlich wryly noted later in their set that at the time of punk they were criticised as being a pop band. 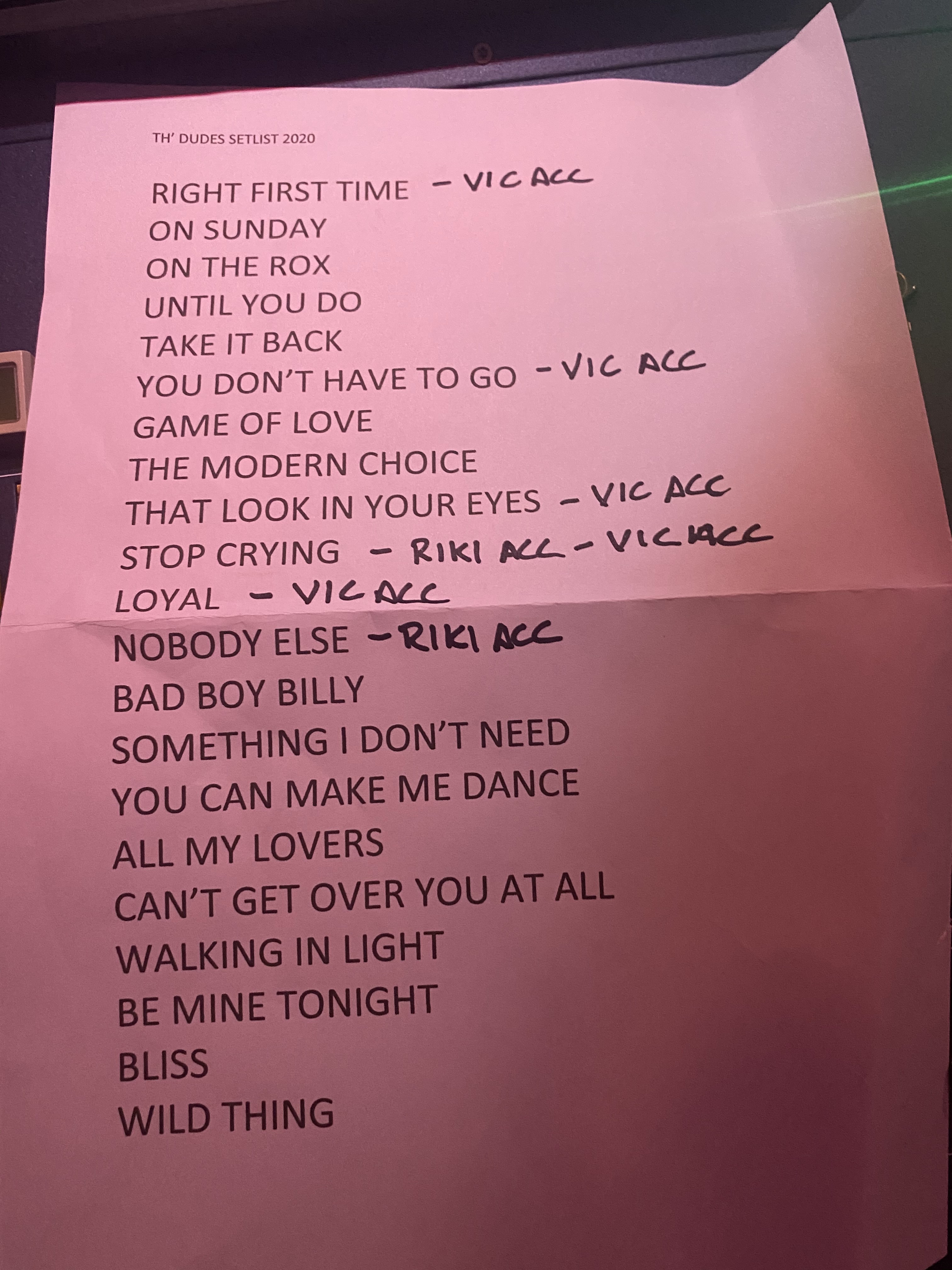 That hardy matters because Th'Dudes delivered a set which was cleverly bookended by Their Famous Hits: they opened with Right First Time and closed with the triple-whammy of Walking in Light, Be Mine Tonight and, of course, a raucous Bliss during which Urlich hardly needed to sing.

We were doing that for him.

But what was interesting – aside from women's underwear being thrown on stage – was how this effortlessly became “Th'Dudes and Beyond”.

They paid tribute to the late Ian Morris (who died a decade ago) with his solo hit Game of Love (which Morris had recorded as Tex Pistol), Urlich sang Dave Dobbyn's hit Loyal (exceptionally, a standout among many) and Ian's brother Rikki on guitar stepped up for a beautiful, slightly fracturing treatment of his solo hit Nobody Else. 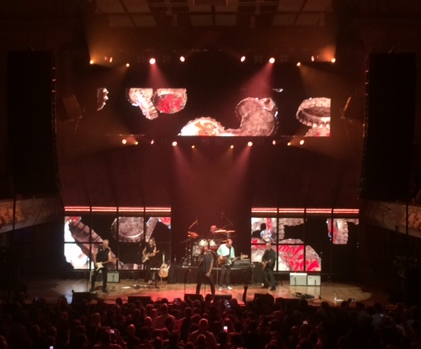 It was a moment when couples held hands. We did.

This – Th'Dudes' third night at the Auckland Town Hall on Th'Bliss Tour – was a celebration of Th'Dudes and their music: Victoria Girling-Butcher (formerly of Lucid 3 and Dobbyn's touring band) was more than just an honorary Dudette on guitar and backing vocals; the rhythm section of bassist Lez White and drummer Bruce Hambling was lock-tight; and everywhere you were reminded of just how smart the songwriting of Ian Morris and Dave Dobbyn was.

Certainly they could be direct and no-nonsense (Bad Boy Billy, Bliss) but That Look in Your Eyes with its coil of tension, Right First Time which Morris deliberately wrote for radio, and especially Dobbyn's Be Mine Tonight are not just full of hooks but are cleverly constructed.

There are few greater pleasures than being in a room where a New Zealand artist sings something which has written itself into people's autobiographies the way songs like Walking in Light and Be Mine Tonight have.

The audience was celebrating a lifelong relationship with Th'Dudes and their songs.

And what this night also reminded was not just that Urlich is an engaging frontman (with an expressive voice, sometimes a hint of Paul Kelly at others raw around the edges) but how gifted a guitarist Dobbyn is.

At a time when punks were dismissing guitar solos in the late Seventies, Dobbyn just let fly and then, as now, he didn't construct a solo to end on a crowd-pleasing sky-piercing moment – as so many metal players do – but has as many descending lines as ascending so he can rebuild it again. There is a fluidity about how he plays which is unique, and it makes him one of the greatest rock guitarsts this country has produced.

All that, glorious sustain . . . and power chords.

Th'Dudes delivered considerably more than what their audience wanted or could have reasonably expected after all these decades, and waved good night to raucous applause after Bliss.

Then came back for Wild Thing and Iggy Pop's Passenger – a singular Iggy song, but Urlich sold it.

Walking out of the Auckland Town Hall -- like many feeling all that much better about life and how lucky we are to be able to have not just live music but this live music -- I said to my wife, just over there on Airedale St was a place called Island of Real.

It was where Th'Dudes played when they were starting out.

Four decades later, here we all are again, at the end of Th'Dudes' journey – their final ever show on December 11 at the The Biggest Pub Gig In The World at Spark Arena – and we're just across the road from where it started.

As much reminder of how a television mini-series and historical drama used to look in the Eighties, this six hour epic across three discs is certainly ambitious in attempting to present the... > Read more