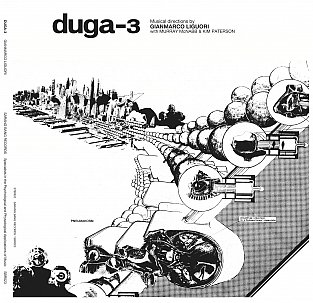 Rather by stealth, the Auckland-based guitarist, keyboard player and composer Gianmarco Liguori has created his own fascinating niche in music which exists at a place where jazz, soundtracks and improvised art music intersect.

In some incarnation he is behind the interesting instrumental group Salon Kingsadore (see here) but the albums under his own name (Stolen Paintings here and Ancient Flight Texts here) have been even harder to categorise. I note that the former is under Music in Elsewhere and the latter under Jazz in Elsewhere.

If there was a category for imaginery soundtracks they could easily feel at home there too.

And a couple of years ago a 7" single from him arrived in my letterbox. There is as much thought put into the presentation of the music as the playing -- and if you note who has been on his albums it is impressive: trumpeter Edwina Thorne, saxophonist Brian Smith, percussionist Miguel Fuentes . . .

And at the core around Liguori are keyboard player Murray McNabb and drummer/trumpeter Kim Paterson who are very sympathetic souls.

For this album all those threads come together in an extraordinary way.

First of all, it is on limited edition vinyl -- just 200 copies available through the website here -- in a thick gatefold cardboard sleeve with artwork and (again) a tie-in short story, and the mesmerising, sometimes eerily ambient music seems to suggest time spent in a space shuttle adrift in the endless cosmos.

There are evocative and distant mechanical clanks woven through, slightly unnerving but quietly industrial sounds, whooshes of sonic wash . . .

But, grounded in electronica soundtracks, experimental Miles Davis of the Seventies, slightly funky Eighties jazz-rock with a nod to minimalism and impressionism, the music weaves its way into the subconscious as disembodied voices, atonal guitar and propulsive keyboard and percussion drive the shuttle further towards the outer limits.

These albums by Liguori (and McNabb's own Astral Surfers album of 2009) offer the indefinable, stand at some distance from just about everything else going on in New Zealand music . . . and provide a ticket to that weightless place where you look back at a world you know, slowly but surely receding into the infinite darkness.

It is quite a trip. And one worth taking . . . on freshly minted limited edition vinyl!

On Monday March 5 from 7.30pm, Salon Kingsadore play Auckland's Stardome Observatory and Planetarium . . . and Liguori's Duga-3 will also be played in its entirety as you lie back and watch the stars.

And that makes perfectly good sense.

and for all the rest of us normal humans without an ancient old turntable, how can we buy this lovely music?

For those of you who don't have a turntable -- you don't?! -- Gianmarco tells me he is making this album available on iTunes very soon.
Meantime, get a turntable perhaps? There are more and more releases on vinyl. The more you listen to breadth and depth of expat British guitarist Mike Cooper's work, the more your respect his innovation . . . all the while acknowledging he is perhaps the least known of all... > Read more 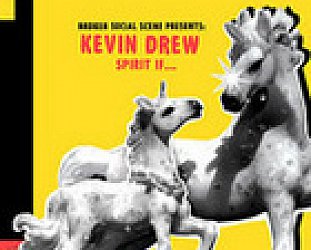