In a guest column for Elsewhere this week, the New Zealand singer-songwriter Greg Fleming notes dryly that his last album Edge of the City with his band The Trains was his dark rock-noir album which got good reviews . . . but didn't trouble the charts.

Elsewhere certainly joined the chorus of acclaim for that 2012 album (see here), and also in 2010 for the long overdue issue of the album Taken recorded in '95 but which was never released.

Fleming, a journalist (so he can write), is one of the country's most affecting, laser-sharp and observational lyricists. Sleepless Kid on this new album is told from the viewpoint of a troubled child who knows the parents are having problems and feels helpless and somehow responsible for repairing the damage. It's a gentle and heartbreaking song of the kind Fleming is accomplished at.

He also turns that journalist's eye on middle-class urban life in the 21st century on Working Poor and a brooding observation of people on the street and the narrator's own internal life on Jaywalkers.

But after his previous if intermittent albums this one feels more shot through with joy and acceptance of life -- and for a songwriter that happiness and domesticity are of as much value as source material as discontent. Honeysuckly Love is just plain fun is bound to be a crowd-pleaser.

And Broken Lights, New Mexico (a line from which this album takes it title) is one of the most affecting ballads he has ever written. Hearing this as a farewell to their relationship, any woman would well up at this naked statement of love, defeat and gratitude. Lovely backing vocals by Dianne Swann make it even more heartfelt, bitter-sweet and romantic.

And unusually, this album opens with a brittle and slashing beat on Nobody where he also exercise a soul-styled falsetto.

If there's a problem here it's that some listeners might find Fleming's vocal range a bit narrow over some of these 11 songs. The Good in other hands, for example, might have been much more joyously aligned to the backing vocals.

That impression is leavened by the bright sounding (but loss-infused) There She Goes and the genuinely cheerful Summer in the City which draws a line between Fifties rhythm and blues pop (as heard through the E Street Band and the Asbury Jukes) and West Coast pop from the Sixties. As a celebration of an empty Auckland in January it hits the spot.

The standout however is the spare and bleak sounding narrative of Cities in the Distance -- the Fleming of earlier days and it sits well even in this context -- which suddenly, when the band kicks in, sears with a real menace.

And Fleming has on hand an excellent band here (guitarists John Segovia and Andrew Thorne get special mention) for an album that is often a departure from what we might have expected, and the better for that.

The pay-off is the expansive Winter Sun at the end. It's another "forget the past" and come back/move on/greet the new day song which is the discreetly underscored theme here.

This album is available from gregfleming.co.nz . . . and see his article at Other Voices Other Rooms here for more contact details.

Have discovered this a bit late, but there are some Great songs on this album, with poignant and mature observations on life, well developed imagery and while having a somewhat reflective feeling throughout, there's plenty of blue sky shining through.
Broken lights, New Mexico in particular is a real classic. 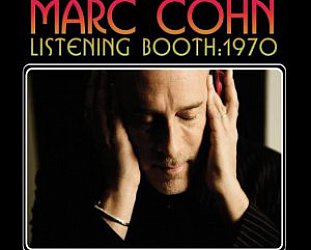 The way singer-songwriter Cohn remembers it, 1970 was when the Beatles, and Simon and Garfunkel, broke up. It was classic singles, the dawn of the singer-songwriter era (James Taylor, Neil Young... > Read more