The Flaming Lips: With a Little Help From My Fwends (Warners) 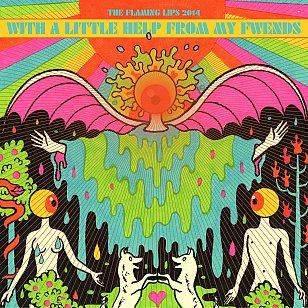 Now here are some words you wouldn't expect to read in the same sentence: "Miley Cyrus" and "the Beatles' A Day in the Life".

Or even "Miley Cyrus" and "Lucy in the Sky With Diamonds".

But when you add "The Flaming Lips" into the equation things start to make some kind of bent sense.

The Lips -- that is, the eccentrically smart Wayne Coyne and pals -- have been down this path before when Coyne hooked in Peaches, Henry Rollins and others for their idiosyncratic take on Dark Side of the Moon.

So given that context, Miley makes sense here . . . and she's pretty damn good in the songs she appears on. Unlike many of the others -- more of them in a minute -- she plays a very straight, melodic bat to the songs and, although a bit crowded out by whooshing and discordant noise on LSDiamonds, her two songs are among the better pieces here.

But it is really a tribute album (a portion of proceeds to this foundation for the care of pets) which challenges preconceptions and sometimes becomes so ear-abusing through distortion that it will throw many off immediately.

And "immediately" means a 21st century take on the orchestral tuning up which opened the original album: but now we are in the world of programmes and such before we get to their version of McCartney's "We're Sgt Pepper's Lonely Hearts Cub Band, We hope you wil enjoy the show . . ."

And, perhaps it's just me, but here the slightly slowed-down vocals mimick the way McCartney speaks these days when he sounds like a 45rpm on about 40 to my ears.

This version of  Help From My Friends is almost designed to weed out purists (Ringo was actually tuneful, even in the rehearsals I have on bootlegs). But if you survive these first five minutes things get often alarmingly good.

LSDiamonds is discombobulating (an ugly word Elsewhere has never used previously and promises not to again) and Getting Better -- with  Dr Dog, Chuck Inglis and Morgan Delt (never heard of 'em myself) -- is true to the spirit of the song. And that;'s the key here: the original Sgt Pepper came out in a world of benign, composed and orchestrated/horn section friendly psychedlic music.

We live in a more disturbed and disturbing age when the drugs are harder, the mood swings more dangerous and people are more on edge. (And more ironic, see Japanese electronic artist Jun Fukamachi's cover to his '77 version of Sgt Pepper).

So this album reflects that -- although Fixing a Hole (by Electric Worms) is a gloriously ethereal and disembodied yet conceptually faithful to toke-smoker McCartney's most acid-influenced song.

In fact there some too-straight takes here: Juliana Harwick et al on She's Leavin Home barely extend the boundaries as other do (aside from the sonic setting).

Mr Kite is an impressive headphones-underwater swirl (more folks I don't know: MJ Keenan etc); Harrison's Indo-trip Within You Without You gets good instrumental treatment with Indo-electroncs but Birdflower and whomever just sign the vocal sheet and it seems like psyche-opportunity lost; and When I'm 64 is what it is . . . even with duffing up.

Tegan and Sara drop by for Lovely Rita (distantly tripped-out dance-pop and not bad); Good Morning is a dischorant mess by some people I care never to hear from again and . . .

We are into the closing overs with the utterly groovy, Sky Cries Mary-type five minute Sgt Peppers improv-reprise (a novice punk-cum-prog band with access to great technology) . . . and then it's A Day in the Life Of with New Fumes, Flaming Lips and Miley Cyrus.

We end where we began.

For more of Flaming Lips and Fwends see here. This American singer-songwriter has been an Elsewhere favorite long before Rolling Stone picked him as one of the 10 artists to watch in 2008. Elsewhere was clocking him in 2007 when his album So... > Read more 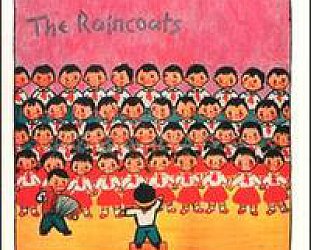