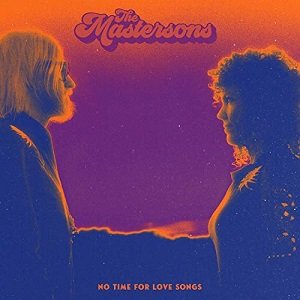 When this husband and wife duo of Chris Masterson and Eleanor Whitmore opened for Steve Earle (in whose band they played) at the Powerstation in Auckland in 2013 many of us got the impression they'd just one helluva bitter argument backstage.

They looked distant from each other and there was barely a smile to be seen.

They appeared happier when part of Earle's band, but that initial impression remained.

And the title track of this album suggests . . .

Actually it's a well-intentioned but half-hearted assessment of America today and how this is no time for any more whisky drinkin' or love songs. However lyrics like “life's not fair” and “how come everybody's gotta be so mean?” are pretty thin sentiments.

True to their word there aren't too many songs here which could be mistaken for being about love, unless it is it's bitter aftertaste or about loss. And while they craft effective country-rock – he lays some sharp guitar and she sings in a keening style -- there isn't very much here you haven't heard many times before.

Despite their protestations of country cliches in that title track here is nostalgia, highways and so on, and they don't return to that vaguely political stance. And some songs just kinda peter out . . .

What elevates it perhaps is that while the times might be tough their lyrics sometimes offer glimmers of light in the emotional darkness.

The Mastersons are firmly genre artists in that they reside within the parameters of a style which includes the later Byrds and Tom Petty, mid-period Lucinda Williams, Emmylou's throat-catch, a touch of US country-meets-Anglo-folk and – speak this low – just a smidgen of early Taylor Swift country-pop.

But while this will have some appeal for its familiarity and some notion of it being “authentic” (it's produced by Shooter Jennings) it is very hard to get excited about it over the full 40 minutes.