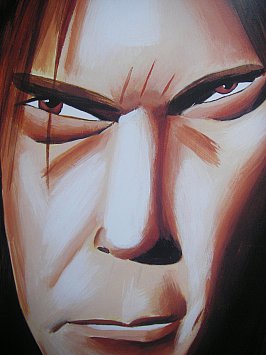 Nothing showy here, but I've spoken to Neil Young three times. And the man was boring and awkward every time. But that's just my opinion.

I've never understood why musicians -- especially those with as many track miles as Neil Young -- bother with interviews if they don't want to talk. Why do they subject themselves, let alone anyone else like a working journalist, to the indignity of such a thing if they are just going to be surly and monosyllabic?

Monosyllabic I was used to -- I interviewed a lot of Flying Nun band members who had less than bugger-all to say -- but when someone like Young is just fuggin difficult I have to wonder why they would bother. To sell records? Are these people that hard up?

I first encountered Neil Young backstage after a gig in Melbourne which had been pretty terrific -- one of those acoustic first then grunty band sets after smoko -- and he was as awkward in his skin as I had been lead to believe.

He was introduced to me by Michael Chugg -- a notorious Australian promoter whom most journalists, myself included, lived in fear and admiration of. Young and I made some tentative gesture towards a handshake and then there was an appalling silence.

In his set he'd made some blazing feedback reference to Hendrix and I noticed he had a Jimi badge on his guitar strap so I tried to make small talk about that. Like how it was great to hear that people of our age (he's about five years older than me) still remembered Jimi.

Okay, pathetic I know. But no one else was saying anything.

No matter. Chugg looked uncomfortable, Young made some small talk of the closed-conversation kind and then he was off to the helicopter to take him up the coast to some luxury island and I had a to find a cab back to the motel.

The second time I spoke to him was a perfunctory phone interview on the back of some forgettable album.

In 1990 I had my most memorable encounter with Young.

To my credit I think, I wrote this up for the Herald exactly as it happened.

I had arranged a long 12.30 lunch with a mate (deadline was passed, my work all done, no need to be in the office etc) when the phone rang at 10.30. Some Amber/Tiffany/Dorothy from Warners Music called to say there would be a phoner with Neil at noon to talk up his new album Ragged Glory.

No problem. A fast-dub copy arrived at 11.30 and I put it on the headphones.

It was, when not ordinary, pretty awful. It was Neil with Crazy Horse grunting through some bog-standard rock like the soon-to-be Westie favourite Why Do I Keep Fuckin' Up which was of no interest beyond its slightly risque title.

The album was mostly outright shit -- it rates a paltry 33 on amazon.com's current ranking of Young albums incidentally -- and the only track that interested me was their dirty cover of the old standard Farmer John which the Premiers had done in the 50s and the Searchers covered in the mid 60s. I wondered why they'd bothered.

So there I was, a dull album, an interview looming in half an hour, and a lunch appointment within minutes of hanging up.

I knew which was the more important.

Noon came and went and then at 12.20 the phone rang and at the other end was one of those oily, polite LA voice say, "Hey Greeee-mmm, and how are you today?"

I said I was busy, and what was happening with this interview.

Oilyman said Neil was held up and he'd be calling in maybe about half an hour.

I said, Well actually I have another appointment in 10 minutes so I won't be here. Can we reschedule?

There was a chilly and disbelieving silence from sunny LA and Oilyman came back and, in a polite but malevolent PR person way, said that might not be possible and did I know what I was asking?

I went equally polite and snakey and said, yes I did but with all due respect this interview had some up unexpectedly, that I did have a prior appointment, and you guys are running late. So could we perhaps reschedule?

Oilyman's voice dripped sarcasm and said that this was "Neil" calling, and that he could only hope for my sake that it was a very important appointment.

At that point I got pissed off at the presumptuous arrogance and said, Well actually it is, thank you very much.

We both hung up simultaneously and I went to lunch with Chris. I had a good story over entrees.

The following day, half an hour earlier than the newly prearranged time, the phone rang and there was Neil who told me he'd done two days of these things and just wanted to go back to the ranch. I was the last today, and maybe he'd have to do more tomorrow.

He sounded tired and bored, and the whole event unpromising.

I immediately abandoned the small talk and dispensed with questions about him being back with Crazy Horse after all these years -- I figured answers to that obvious question would be published elsewhere and I'd crib their answers -- and so I got into politics of the day and said that with the Middle East exploding and "explicit language" stickers on CDs (like on his) the 90s were shaping up interesting.

He'd made some political statements so I thought this might be a more interesting direction to go in.

His answer to that was, "Yeah, I guess so. Have you heard the album?"

Okay, so let's go down that dull path.

I said it sounded like he'd married country music and the guitar density of his previous album Freedom.

Obviously the old David Frost trick of leaving a silence for the subject to fill wasn't working so I asked about whether his manager Elliot Roberts had been right about him writing Fuckin' Up just to invite the "parental guidance" sticker. Not my words Neil, but those of your manager.

That didn't work either.

"I dig this record because it really rocks,"was his illuminating reply. One for the book of Great Rock Quotations.

So I asked about Farmer John which was the Premiers' song and covered by the Searchers blah blah . . . And he said, "Dunno that. That was Pancho's idea, you should talk to him".

And the next thing Frank "Pancho" Sampedro is on the line making yuck-yuck in-jokes and boring the arse off me.

I asked if Neil was around.

The rest was even worse bullshit.

I said politely I hoped he'd make it down this way.

Hey, thanks for your time.

I've never spoken to him since. Never want to.

Want something better than this? Then go here.


Really enjoyed this posting and you sound about right. I guess, as brilliant as he is, he lets, ultimately, the songs do the talking!

Quite a few artists I admire for their music are reputedly prickly interview subjects, to put it politely. Miles Davis and Lou Reed spring to mind. Never having talked to them I can't be disillusioned - perhaps the best way!

Neil Young fans _want_ him to be a nice bloke, and on reading this story immediately start thinking that he might be nice normally, but Graham just caught him on, er, 3 bad days.

Then again, there is that footage of him during the early 70s (I can't remember which documentary) where his snapping at the band stands out as being unnecessary, at best.

Perhaps he's one of those people who alternates between periods of being not easy to get along with, and period of being normal. Or it could be that he can't be in a good mood when he knows underneath that his current album isn't that good.

Maybe he gets disillusioned quickly. By Tonight's the Night he was already "a million miles away from that helicopter day", referring to Woodstock. And he's no doubt had his fair share of hippy folk wanting to be friends.

Whatever the case, he has put out some of my favourite albums, and there's something about his philosophy regarding how music should be created (wooden, analogue, home made, ...) that I sympathise with. Although I did purchase On the Beach on CD, even though he resisted releasing it in digital form for years.

Interesting. As I recall Karyn Hay has said that Neil Young was one of the most unpleasant people she has interviewed.

I remember reading this article when it originally appeared in Real Groovy (?). Interesting to re-visit it. The album you refer to is Ragged Glory. I am a Neil Young fan (tho' not one of those obsessive ones). I like this album a lot - always have.

I see All Music (a much more reliable source than Amazon I believe) gives the album 4.5 stars, with only 5 albums above it, and sitting alongside Freedom, Zuma, Comes a Time and others. I find myself more or less usually in agreement with All Music ratings, and I think they have things about right with Neil Young and his back catalogue.

To quote the AMG review " ...the tunes were catchy, with strong melodies and good choruses....", "...extend his creative rebirth with music this exhilarating..."

But hey - that's the great thing about music - there's no right or wrong. I like it, you don't All good!

Not sure what happened to Neil. In early footage and he seems quite talkative.