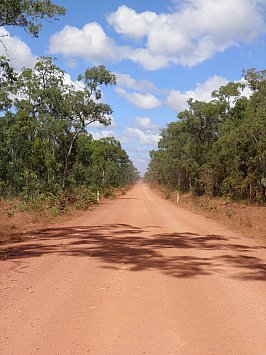 No more than a few minutes south of the tiny settlement of Bamaga in Australia's remote far north, Dean hauls our sturdy four-wheel drive Oka over and somewhere off the map and we climb out. Watching for snakes, I walk between dust-dry scrub and spindly trees and there, bent and misshapen, is the rusting skeleton of DC3 which crashed at the end of the Second World War.

It exhausted its fuel a few hundred metres from a makeshift runway, many decades ago claimed by low bush, and all six on board were killed. The fuselage is mostly intact but wing parts are scattered and one piece is bent smoothly around the trunk of a long gone tree.

Dean Nulty of Wilderness Challenge – taking our small group from Cape York down to Cairns in the massive Oka – says there are dozens of downed wartime aircraft around here. Some never found, because there's not that many people here poking around in the bush.

In fact, once you get out of Australia's cities – which hug the coast as if cowering in fear of the vast hinterland -- there are few people anywhere. The guestimate is there are only about 17,000 permanent residents on Cape York Peninsula, an area three quarters the size of Britain. 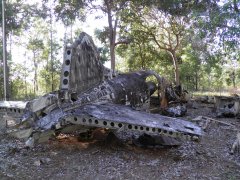 You can lose a plane or two around here and no one would know.

And as we head along the red dust road to remote Cape York I remember another outback experience a couple of years previous, about 90 minutes south of Darwin on Scott Witham's vast Mt Bundy Station.

After a bone-shaking drive up rocky outcrops, through chest-high grass, and around photogenic billabongs where crocs lurked, Witham pulled over his heavily re-enforced open-top truck at a long and unnaturally flat stretch of land.

“Yeah, this was an airfield,” he said languidly as we baked under a cloudless sky. “There’s another on the property too . . . but we haven’t found it yet.”

Welcome to the Big Country, one so vast you can lose aircraft . . . and an airfield.

In the past decade I've been increasingly attracted to those dramatic parts of empty Australia way beyond the last suburban home, that place where the sealed road ends and the magic begins. Out there is an entrancing, different sense of scale, space and time. 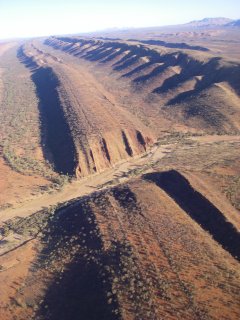 One morning at Glen Helen, somewhere half way between Alice Springs and Uluru if you go the long way round, I climbed in a helicopter to try and comprehend the sheer magnitude of the endless rolling hills which local Aboriginal people called Caterpillar Dreaming.

From up there those rippling humps and the MacDonnell Ranges running parallel – an estimated 60 million years old – disappeared into the hazy distance in both directions. Neither the pilot Peter nor I exchanged a word. We just hovered there and took in the timeless immensity.

I remember this at lonely Cape York, the northernmost point on the continent, and dream myself up into the sky and try to imagine that endless landscape below.

Vast and unpopulated it may be, but Cape York Peninsula is alive with Aboriginal culture, colonial history, skittish animal life and plants which fed and healed indigenous people for tens of thousands of years.

Occasionally Nulty pulls the Oka off the unsealed tracks which constitute roads to show us a plant you spit on and it becomes a useful soap, one which is a natural disinfectant, another retaining an almost unnatural amount of water . . .

And while wallaroos, emus and dingos bolt into the bush as we approach, it isn't too hard to sneak up on a nest of green ants.

“The Aboriginal people would put a few dozen in a bowl with water and get the juice out of them,” says Nulty as he picks a fat ant off the nest. He invites me to suck its abdomen and, sure enough, it has a pleasant citrus taste.

Nulty – who has lived most of his life where there are no lights at night just a heaven ablaze with stars – has great respect for Aboriginal people, speaks some of their languages and knows the myths intimately. One afternoon we climb a small range of hills near Laura (population 70, according to the sign) to see Quinkan cave paintings of the Imjim and Timara spirit figures which date back at least 10,000 years. There are dozens of sites like this around here – most protected and closed to visitors – and this region is considered by UNESCO to be one of the world's top 10 rock art areas. Under that vast canopy of cloudless blue where the heat makes you slightly woozy, you can consider that incomprehensible scale of time of the Aboriginal Dreamtime with its myths and spirits. It feels like a living thing.

But if the Aboriginal people knew how to survive out here, the landscape was unforgiving to many of the early explorers. Australian history is littered with names of those like Burke, Wills and Ludwig Leichardt who died alone, sun burned and thirsty.

As Tim Flannery notes in The Explorers, a collection of first-hand accounts of those who ventured into this great unknown, “explorers cannot exist without a frontier, and the frontier of Australian exploration has almost always been between two cultures”.

Every region has its stories, in the far North one is of Edmund Kennedy and his Aboriginal In 1848 Kennedy, a British-born surveyor, and a team were charged with finding a route to the Gulf of Carpinteria on the west of the Cape York Peninsula. Even today there isn't much there aside from the bauxite mining town of Weipa.

The expedition started from such an inhospitable part of the coastline that in the two months they hacked and waded through mangrove swamps and dense bush they barely made 35 kilometers inland.

The party split up, one group staying where they were and the other – three men lead by Kennedy and Jackey Jackey – worked their way north in the hope of meeting their supply ship near Cape York, some 800kms away. Of the eight who remained, six died of starvation.

Further up Kennedy and Jackey Jackey took four of the horses, left the three behind – who were never seen again – and pressed on through the endless landscape. Just 20kms short of rescue the increasingly weak Kennedy died after being speared by an Aborigine.

This pitiful story is also bleakly heroic however, it speaks of that willingness of explorers to head into an unforgiving landscape in search of a route and possibly glory.

On his third expedition earlier that same year the foppish, German-born Leichardt – who believed God had granted him this continent to explore – disappeared without a trace somewhere west of the Great Dividing Range.

“Without a trace” are words which also convey the vastness of this remarkable landscape. Planes, airfields and people just disappear out here. And where there are graves they tell their own strange stories.

At Musgrave Roadhouse, the site of the old telegraph station, is the headstone of John Augustus Mayers who died in 1924. He had been born in Stockholm and you wonder what brought him to this place in the dead centre of nowhere where the nearest town would have been Cooktown perhaps a week's ride away.

“A lot of suicides out here,” says Nulty about those who manned the telegraph stations strung out between Paterson near Cape York and Palmerville near Laura. “People just couldn't take the isolation.”

Many drank themselves into semi-consciousness to get through the loneliness. Others didn't even try and fled back to the safety of the towns. All but one of the original stations are gone. Just Musgrave, built high and with shotgun corners to repel aggressive Aboriginals, remains.

If it is a harsh and indifferent land it is also astonishingly beautiful, and you stumble on its wonders almost by accident.

In fact, Fruit Bat Falls – a picturesque watercourse – was just a kilometre or so from the old telegraph line but was undiscovered until some road crew went for a walk one day. Those Quinkan caves above Laura were found the same way in the 50s.

Leaving the road is, of course, unwise. But a drive through this remarkable region, even on those rutted tracks which become impassable sludge in the wet season when trickling streams turn into red-brown torrents and rivers can rise by a dozen metres, is thrilling. 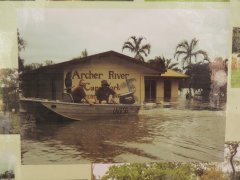 One day I take two photos back-to-back. The first is of a mural on motel units at Archer River, the other is of the photograph inside the motel's shop of two guys in a dinghy going past the same mural. The nearby Archer River down the hill had risen around 15 metres in a day.

Actually I take dozens of photos, many of a similar thing. A dry road ribboning out to the distant horizon.

There is so much to see on and off these rust-coloured roads: A beautiful but deserted beach at Somerset near Cape York which a century and a half ago was going to be a port city to rival Singapore (no one factored in the lack of fresh water, appalling heat or the population of crocodiles); fields of termite mounds and one living tower at least nine metres high; and breathtakingly beautiful billabongs where motionless water reflects bleached white tree trunks in a weird optical illusion. 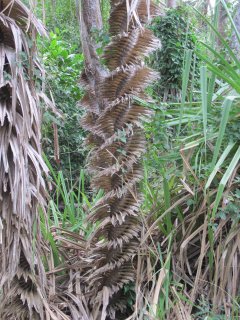 There are bright blue orchids and strange spiral bark on trees, mountains of black stone and empty coasts of linen-white sand, Aboriginal petroglyphs of undetermined age carved into ancient stone, and hilarious graffiti covering every piece of wall space in the notorious Lion's Den Hotel just south of Cooktown.

Photographs and memories are what you bring back from that great expanse of Australia beyond the suburban street lights and fast food restaurants, the place which measures everything in different scales of space and time.

Out there is where explorers and their hopes died, where Aboriginal people dreamed themselves into the endless landscape, and where heroism was day-to-day survival against the vagaries of the climate. Out there is where great cities never appeared, and where spirit figures stalk the land as real today for the indigenous people as they ever were.

And out there everything seems bigger, wider, darker, brighter and more dramatic . . . because it is.

You can lose an airfield in it.

You can, in a very good way, lose yourself in it too.