Jerash, Jordan: A city of goats and ghosts 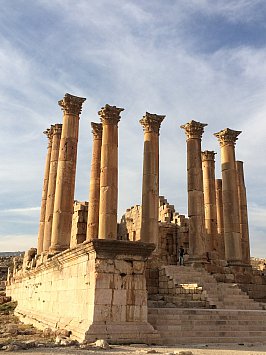 The Bedouin boy smacks a stick on a bleached rock and his small herd of goats, alarmed, leap forward a few metres then begin again fossicking for weeds and tufts of grass in this parched landscape.

As the late afternoon sun creates long shadows and the blue sky turns a watery orange, you might wonder how often – over thousands of years – this same scene has been acted out here.

Across the dry riverbed, pale houses of stone and cement creep up a hillside, but here the rolling land is level in places where carts and carriages once rumbled, and all around are the skeletal remains of a great city.

This is Jerash in northern Jordan, less than an hour or so from the capital Amman. And because tourists to the country are inevitably seduced by the drama of Petra to the south with its temples carved into sandstone and Indiana Jones associations, this remarkable ruined city can offer a quieter experience by being less visited. Yet Jerash, even for those who have seen the Forum in Rome or walked the ruined streets of Pompeii, is a breathtaking sight.

Stretching across low hills and off into the far distance, at times the place can throng with visitors – notably during the festival season where concerts are performed and battle re-enactments take place -- but on a quiet day the dead city still feels as if it breathing life.

Unlike Petra where earthquakes and erosion have taken their toll over centuries and turned much of what the Nabateans and Romans built to rubble, you can actually see and feel this ancient city which lay largely buried until the early 19th century.

Over there just past Hadrian's Gate at the south entrance is the Hippodrome, an extended oval for horse and chariot races some 250 metres down each long straight, and with tiered seating. Further along is a small avenue where the remains of the shop walls give you a sense of what this thoroughfare must have been like when peopled by merchants, customers, soldiers from the barracks opposite and the nobility on their way to the temples further along. Roman ruins are all over Jordan: in Amman alone there is a remarkable amphitheatre and a sprawling hilltop city. Across the most fertile and populated areas in the west of this small country there are garrison outposts and temples, structures which date back to pre-Biblical times and still functioning amphitheatres.

But Jerash – known as Gerash by the Greco-Romans who built it on the site of an even older civilisation which dates back to the Bronze Age – is special.

The columns of the cardo maximus, the main road from the wide forum, disappear to a vanishing point in the distance and everywhere are avenues and enormous buildings like the Temple of Artemis surrounded by Corinthian columns made of two-metre high blocks mounted on top of each other.

If the scale of the buildings is impressive – the enormous Nemphaeum is especially stunning – then so is the small detail: blocks stacked along the cardo maximus have intricately carved floral patterns, the mosaic tiles at Saints Cosmas and Damian Church are in surprisingly good condition, the Byzantine era “cathedral” (named as such by the Americans who excavated it in 1929) has refined and elegant lines, stones on the roads bear the indentations of a thousand carts from an age long gone . . . And if some parts, like the crumbling Temple of Zeus, seem a clutter of fallen pillars and eroded blocks, this just means they act as a counterpoint to those massive structures still standing.

At day's end the young hawkers selling postcards, books and their time barely make an effort as we walk back through the empty forum.

The evening now belongs to the ghosts of the past . . . and a young boy herding goats through the bones of a city which once commanded a pivotal position in the Roman Empire and then was buried for hundreds of years by the dust of time.

For more stories on Jordan at Elsewhere go here, here and here.

Did you meet the Jordanian guy who plays the bagpipes there? Amazing.