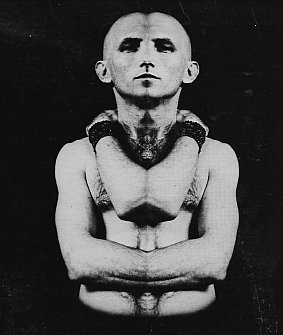 When a couple of writers from the then-recently launched Re/Search tabloid went to visit the experimental percussionist known as Z'EV in 1981, the conversation was esoteric and philosophical.

The fact Z'EV banged on odd objects to make a noise hardly entered the discussion.

Re/Search – which was founded by V. Vale in San Francisco after his influential punk rock mag Search and Destroy magazine folded – went on to become one of the most interesting, left-field and provocative magazines of its era.

Its spin-off publications like the volumes on Incredibly Strange Music, Pranks and Modern Primitives are cornerstone reference books for anyone looking beyond the mainframe of popular culture.

In the same issue of Re/Search where Z'EV was interviewed – issue number 2 – there were photos of Iban tattooing from Borneo, articles on Aboriginal music, James Blood Ulmer (only then emerging as a distinctive guitar stylist), eroticist Seda, a chart of German electronic musicians, something on what to do if you get poisoned, an extract from the letters of 19th explorer Isabelle Eberhardt, an article by a woman who lived for a year with the Masai . . . 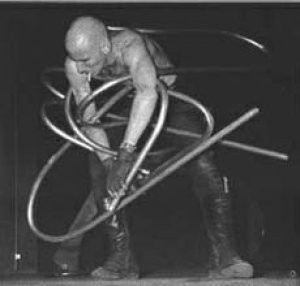 Re/Search was taking a wide view to culture . . . and Z'EV was right in its sightlines.

Z'EV – born Stefan Joel Weisser in '51 but even by the time Re/Search got to him going by other names such as Yoel, Shaoul, Uns, Raks Works and GDG – had come to attention for his improvised percussion pieces around San Francisco on a variety of found objects and kinetic sculptures of his own creation.

But, as mentioned, the conversation was about The Futurist Manifesto, Burroughs and Gysin's cut-up method of writing which had been anticipated some 50 years previous by Dadaist Tristan Tzara, the Kabbalah, some weird mathematical configuration he'd worked out based on words and their attributed numerical value, Aleister Crowley and the Golden Dawn, magick . . .

Aside from a short reference in the interview's intro about Z'EV touring Europe and the US opening for Bauhaus, playing in Britain with Cabaret Voltaire, Throbbing Gristle and Clock DVA, and something about some recordings being released, you'd be forgiven for thinking Z'EV was some mad mystic rather than a musician.

Of course, many who have heard his early albums might also dispute the “musician” definition and he himself preferred to put the emphasis on the spontaneity of performance rather than the sound produced.

But Z'EV was very much in the vanguard of industrial noise and found sounds, conceptual art and a kind of audio-visual poetry-cum-performance art. Some argue – and the evidence of a timeline seems to support it – that he anticipated the style and attack of groups like Einsturzende Neubauten, and as a performance artist using percussion he was certainly on a parallel track (with very different intentions) to New Zealand's From Scratch.

He studied drumming in the early Sixties and aside from a brief foray into jazz-rock (auditioning for Frank Zappa's Bizarre label) he appears to have had very little to do with mainstream popular culture. 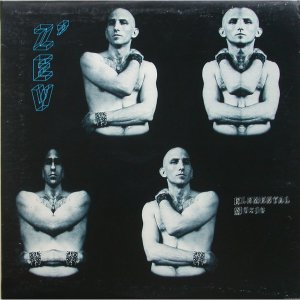 He abandoned Judaism before his bar mitzvah (although Z'EV is drawn from his Jewish birthname) and explored music and cultures from the global village, mostly those with an esoteric underpinning.

Early albums like Experimental Music (1982) and My Favourite Things ('85) were recordings of live performance: the former album one long piece spread over both sides of the record; the latter shorter extracts recorded in New York, Baltimore, Sweden and the Netherlands.

My Favourite Things was dedicated to John Coltrane, but 'Trane fans perhaps should be given and advisory warning.

However since the Eighties, the sound of Z'EV has become much more accessible as the rest of the world either caught up or outdid him in the sonic noise stakes. Ensembles like Strike and stage productions like Stomp have made the sound of percussion mainstream entertainment. 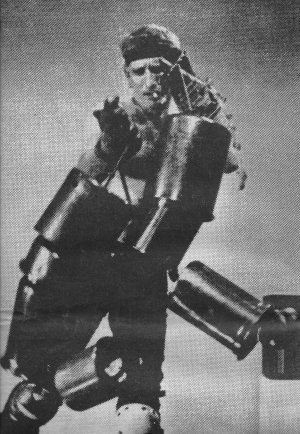 In the early Nineties, Z'EV found a kindred spirit in Glenn Branca whose dense guitar orchestra sounds he had something in common with.

These days you can find music by Z'EV on iTunes and Spotify (although not a lot given he has recorded dozens of albums and singles) and his recent aural constructions now sound much more accessible.

For example his album with the Italian ensemble Larsen on the 2011 live album In V.Tro (go here for a free stream) in places has beautifully ambient landscape but sounds almost tame . . . certainly when lined up alongside his more aggressive, furious and demanding sounds of the early Eighties.

Especially when he was wearing his Art of Noise outfit and clattering the tin cans.

Got to admire the man who, on that album My Favourite Things, suggested of one piece that it “should be played at high volume to bring out the more subtle sonic textures”.

And oddly enough, it was true.