Tycho Cohran – aka LT – was always destined to do something in music, as were his seven brothers. The sons of jazz pioneer Phil Cohran, a Sun Ra Arkestra player and founding member of the AACM (Association for the Advancement of Creative Musicians) in Chicago, the boys were given instruments at an early age and of course there was always music around the house, including family sessions and lessons before school.

And so, some years later, was born the Hypnotic Brass Ensemble, a swinging funked-up brass band of Cohran brothers (and some friends) which began life jamming in subways but now commands the world stage alongside Gorillaz (they appear on three tracks on Plastic Beach), Wu Tang Clan, Tony Allen, Femi Kuti, Blur and any number of major players who have called on their unique sound.

They've even got a hit record out there, their version of War appears on the soundtrack to Hunger Games.

We catch up with “32-years young” LT in California.

So you were always going to be a musician, was there any other career choice for you?

There were plenty of career choices for me and one of my loves in school was law, but the way our father raised us was with the option of 'I'm going to teach you music, it's something you don't have to do but if you end up with nothing you always have something to fall back on”.

That's interesting because most parents would say do law so if music doesn't work out you have something to fall back on. Your dad was different.

Law was definitely something I loved doing but music was innate with everybody on the family.

You play sousaphone which is a huge instrument. Were you the bad kid in the family so you got given the heavy one?

No, I just played it because it suited my personality. I guess I'm unique in that. Most of the guys walked in the footsteps of my father who was a trumpet player but my first instrument was classical French horn which I chose because of one the songs my father played that I used to love. He played on French horn.

The reason I got into sousaphone was because it seemed like a man's man instrument, like down in New Orleans or in any university band if you meet the sousaphone player they are usually a very big guy, tall and they have to almost manhandle the instrument in order to play it.

When I was a young boy and saw guys doing it, it was awesome and the sound was authoritative and commanded your attention. I wanted to be like that when I grew up.

I just knew I had a better chance on sousaphone than on a basketball court.

When you play contemporary material I guess mostly it is the bass lines which are transposed onto your instrument.

Yeah, before there was bass guitar there was sousaphone. I do what comes naturally to me now. Most bands have their second line, and a lot of sousaphone players do something different from what a bass guitar player would be doing. Most people would say my style was more notes in there. I just like to be me and you want to include whoever you are on your instrument.

It seems to me to there is a tradition of big bands out of Chicago. I think immediately now of Lester Bowie's Brass Fantasy and there is also Mucca Pazza around now, doing something different again but with a big brass section playing contemporary material alongside music grounded in the tradition. Is that the case?

More so in schools. The sad case is that in Chicago players come up through school and even universities and they will have that outlet of bands to play in. But by the time they get to when they want to become professional there are only a couple of outlets. You can join the symphony or, depending on your instrument, maybe a [jazz] band. With sousaphone there are not a lot of outlets so a lot of guys have to put the instrument down and get a regular 9-to-5.

In New Orleans there is an outlet for all these instruments because after school days there is clubs and bars and Mardi Gras and bands where they are calling for brass and horns.

I guess Hypnotic Brass has been an inspiration for a lot of young people. You get into schools from time to time?

Very rarely in America but sometimes. We will do workshops and seminars and bring in talented people from different schools like Berklee and maybe kids who never thought of playing before. Because we are still young a lot of kids think, “If they can do it, I can do it”. We like to think we are making horns cool again, like an add-on to jazz, but in a different genre.

Because you have played with so many different people there would be kids out there who see your name on a Wu Tang album then there will be others who have seen you with Blur. You seem to have put yourselves into this broad spectrum of music.

There are critics, and even just others, who try to put music into a box to commercialise it and sell it. But there is just good music and bad music. By reaching into ourselves we have a sound that is original and cannot be found anywhere else in the world so no matter what genre you are in or who you are, you come across our sound and say, “I like that sound, I want to work with that”.

That is how we get to be with blues and pop and jazz and hip-hop and rock.

Everybody who wants to work with us can because we have eight different personalities and all of whom compose, so if one guy might not be up to it with someone then we do have what you want.

Instinctively we do give you what you want.

It is very diverse. I hear contemporary music and reggae but also music which is grounded in a long American traditions. 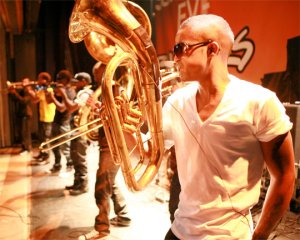 Do you have a busy schedule where you are now booked for the next year.

We do six months and then six months, but every now and again we look ahead a year. Right now have a week off and we are doing London, Belgium, Australia, New Zealand and will be out for a month and half.

You now have drummers with you.

Yeah, for a long time I was the bass and drums so to speak, but now we got a drummer I can speak to him – he's not a brother – and I let him know the different tempos and can speed him up or slow him down, just get the tempo right.

Most people who come from where we come from would never leave Chicago let alone leave America or go to the other side of the world. So when we get that opportunity we just want to take it and are highly anticipating coming down and being ourselves, that's all.

Playing music is the best passport you have.

Hey there Graham,
Thanks for the post, I am looking forward to the concert, really really love brass! Must confess sousa my fave...
Cheers Tans ;] 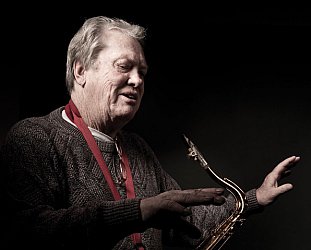 Saxophonist Bobby Keys says he doesn't drink these days: “I'm extremely sober. I mean, I'll have a beer every so often, but it's been years since I've been drunk. I don't drink anymore... > Read more