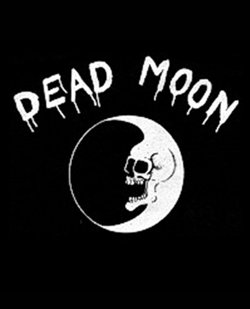 The promoter John Baker – who brought Dead Moon over to New Zealand for the first time – reminded me recently of when that was: August 1992.

I hadn't remembered the month only vaguely had the approximate year, however I have never forgotten the moment Dead Moon came into the highly conservative offices of what people jokingly then called “The Royal New Zealand Herald” or “Granny Herald”.

Yep, the Herald was very straight but when improbably tall Fred Cole in western rockist leather gear and black hat, his tiny wife Toody (similarly all in black) and drummer Andrew Loomis (likewise) walked through the room you could hear audible gasps. 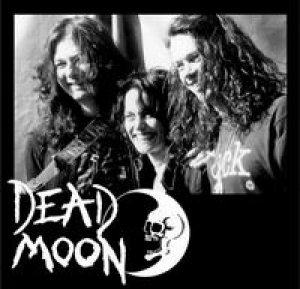 It was like a scene in a Western when the gunslinger pushes open the swinging doors of the saloon and the pianist stops playing.

People asked me afterwards, “Who were they?”

I doubt before – or since – the Herald had been breached by a man with a Dead Moon tattoo on his cheek.

I liked Fred, Toody and the quiet Andrew instantly. They were funny, scrupulously polite despite the rather menacing appearance, and the garageband rock they made in their home studio in rural Oregon (mastered on the same lathe as the Kingsmen's Louie Louie, Fred said proudly) was to my liking.

And they must have liked me because after I had written up a story on them – they were touring the country playing 19 shows – I got from them a signed copy of their thrillingly mono album Unknown Passage on their own Tombstone label.

I still have that album and clearly I must have written to them afterwards because inside the sleeve I have a postcard from Fred postmarked Holland where they were starting a seven week European tour. “Pray for us.” he wrote, “and have a drink to celebrate whatever”.

Well, right now I'm celebrating with a drink because three early Dead Moon albums (among them Unknown Passage) – have just been released “available for the first time on worldwide CD” through M'Lady Records in the US (Southbound in New Zealand).

These first three Dead Moon albums have been remastered from the original tapes and they are In the Graveyard (from '88 ), Unknown Passage ('89) and Defiance ('90).

I have gone into bat for the greatness that Dead Moon before (see here) but in short the Fred Cole story paralleled the music of my lifetime: he was in the early Sixties garageband The Weeds (their sole single was It's Your Time), in the psychedelic era he was in The Lollipop Shoppe, then it was a hard rock band (Zipper) a punk band (the Rats), the country-influenced Range Rats . . .

Dead Moon took him right back to those garage roots with a twist of country and classic rock thrown in.

Fred is now somewhere in his mid 60s and still out there touring. He and Toody retired a few years back but that didn't last and they came back as Pierced Arrows. 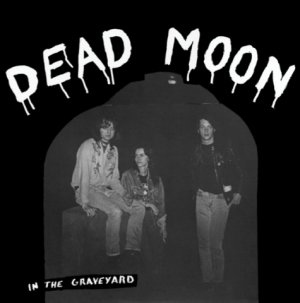 On that In the Graveyard debut Fred sings the covers of Parchman Farm and Hey Joe (both done like an angry surf-rock band), and Toody (never the greatest singer) gets to do Can't Help Falling In Love With You. But it is their raw originals which are key: the country-rock twang of Dead in the Saddle, raucous coffin-rock of Graveyard and Fred-aquiver on Out on Wire.

The final track is the low and menacing blues of . . . I Hate the Blues. 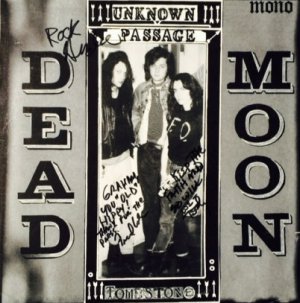 Yes, 10 songs in just 29 minutes and with a dollop of humour added to the intensity.

Unknown Passage opens with their cornerstone garage anthem Dead Moon Night (opening line “thunder bolt and nightsticks comin' out of the sky . . .”), their terrifically furious live favourite 54/40 or Fight, a cover of the old Chambers Brothers hit Time Has Come Today, Fred-aquiver again (it's his ballad style) on A Miss of You but playing it straight and nasty on I'm Wise (beamed in from a garage in '64) . . . 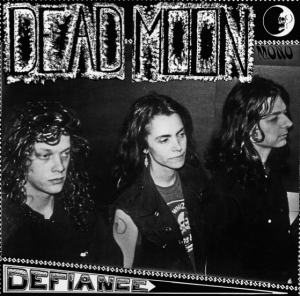 Defiance completes this early trifecta of primitive but perfect rawk'n'roll: It opens with the old Milk Cow Blues (which Elvis, Eddie Cochran and the Kinks among others have cut) but the other nine songs are archetypal Dead Moon three-minute r'n'b influenced shouters and quakers (early Yardbirds, the Downliners Sect, the early Saints, the Sonics and the Seeds have all been cited as reference points).

This issue of Dead Moon is worthy for two reasons: this is great garageband rock, and they deserve the royalties they will receive. 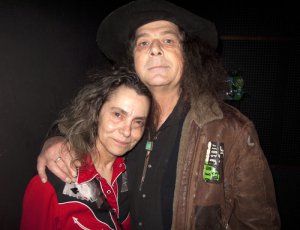 By my reckoning Fred and Toody have been together for about 50 years. That's a great rock'n'roll love story, especially for people whose music seem to be in perpetual adolescence.

The CD reissue of their albums continues next month and among them is Strange Pray Tell which includes their take on the Stones' Play With Fire and the thrilling Fire in the Western World. 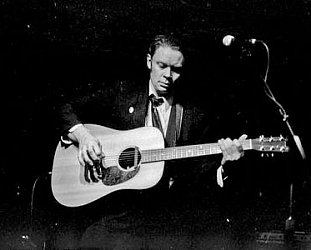