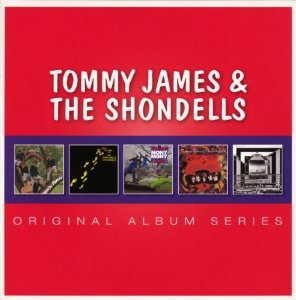 One of the best, most revealing and somewhat scary books about the inside story of the American pop music business in the money-no-go-round Sixties came from Tommy James, the man who scored hit after hit with songs as catchy as Hanky Panky (1966, written by Jeff Barry and Ellie Greenwich), I Think We're Alone Now (later covered by Tiffany), Mony Mony and the lightlydelic classics Crimson and Clover and Crystal Blue Persuasion.

James' book was entitled Me, the Mob and the Music which gives you some idea of its content. Signed by Morris Levy who was surrounded by some seriously thuggish characters, James and his band barely saw a cent of their multimillion sales (although had considerable artistic freedom). Levy had to flee to Spain when the Mob wars got serious and James later took himself off to Nashville just to put some distance between himself and the bad business.

Yet despite that, James still had an affection for the unscrupulous Levy and notes that if it hadn't been for him he'd never had had a career at all.

The evidence of just how good James was in those early years is all over this five CD set where you can hear him bringing a smart Fifties pop consciousness -- short songs, memorable hooks, a touch of doo-wop -- into taut Sixties-era pop.

Yes, they covered Good Lovin' (the Young Rascals hit) and James Brown's I'll Go Crazy (which Blues Magoos also did) as well as Shake a Tailfeather (the following year James and Bobby Purify took it onto the charts), but James' tight and raw voice carries even the weaker moments on their Hanky Panky debut album of '66.

Being essentially singles artists, James and the clean-cut Shondells had to rely on some filler for their albums, but the quality is rather higher than that of their peers, and James quickly hit his stride as a writer (although they relied on producer Ritchie Cordell for many of their earlier hits and album material) and delivered a neat line in ballads.

And then, for his final album with the band, he made the leap into experimental psychedelics for Cellophane Symphony in '69 which opens with the nine minute-plus title track which sounds more like Pink Floyd than the band which delivered Hanky Panky and Mony Mony.

There is quite a career arc circumscribed on these five albums and when he embarked on a solo career James kept the hits coming with Dragging the Line (and some interesting albums such as Christian of the World) before he fell prey to drugs.

Tommy James had one of the more interesting careers in Sixties (and beyond) pop, and that he lived to write about it with such candour in his book is something of a miracle.

But here is the music he made while in the company of Levy and his goon squad.

An excellent collection and, at just $20 at JB Hi-Fi stores here a real welcome addition to our on-going Bargain Buy series.

As you say, a brilliant singles band. I most of these lps once but it's the singles that really work. Gonna get this to remind me why I let the lps go, only keeping the Greatest Hits one!