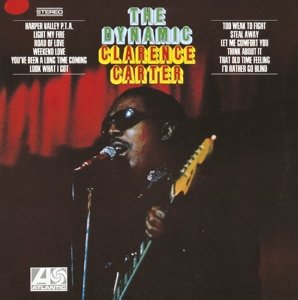 One part smooth Otis Redding, one part the more sedate end of James Brown and steeped in Southern soul, the great singer Clarence Carter was one of the finest interpreters of a song, even if he only rarely cracked mainstream attention.

In the late Sixties and early Seventies he enjoyed a number of US rhythm and blues -- and even pop chart -- hits (notably Slip Away and Patches) but in New Zealand his songs were rarely, if ever, heard on radio. He wasn't Motown.

In fact he was almost one step better because he recorded at the FAME studio in Muscle Shoals and there they brought country-soul rather than urban matters into the mix. So Carter singing Harper Valley PTA -- as he does on this excellent album -- was no stretch at all.

Here too we have his aching take on I'd Rather Go Blind, the exceptional retribution ballad Look What I Got, the horn-punched Think About It written by Dan Covay, the bluesy Road of Love, a straight but soulful Light My Fire with strings, his million-selling Too Weak to Fight . . .

The supportive band includes Duane Allman (pre-Brothers), pianist Barry Beckett and a horn section of studio stars, and it is produced by Rick Hall.

A greatest hits collection might be the way to go on Clarence Carter, but this album -- just another along the way -- shows what a malleable talent he was and at $10 at JB HiFi stores here, this Japanese import (original liner notes and lyrics in English) makes it easily into our Bargain Buy selection.

A soul star to discover.

Hi Graham
Delighted to hear another version of Look What I Got. The only version I was familiar with was done by Boz Scaggs on his eponymous/first solo album. It is one of my Top 10 of all time songs and if Boz pre his MOR stuff (first 3 albums) is of interest and if Duane Allman does it for you take a listen to Boz's version. He nails the vocal and Duane has ample space to showcase his stuff AND the back up singers are awesome. I recommend Boz's version and the entire Boz Scaggs album. Thanks Graham. Murray