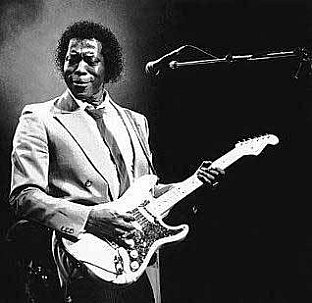 Buddy Guy is talking about his club Legends in his home town of Chicago. Every Sunday and Monday it is open for all-comers, just sign at the door, get up there and play your blues.

Since Guy won a Grammy for his raw and soulful Damn Right I Got The Blues album this year, he’s seen a few more up-and-corners through the door.

He remembers when he first hit Chicago in the Fifties, "a million clubs and two million guitarists,” but now drinkin’ and drivin’ and drugs have killed off this once vital blues scene. So Guy keeps Legends open for the kids coming up.

"Well," says this sprightly sounding, fiftysomething guitarist/singer who gets audiences stomping, “ain’t no one going to come up to you in any city and offer you a job. You got to knock on doors and go looking for it . . . but if I can help, then I guess I should. This music’s been good for me.”

Yet there are double ironies in that.

Not only did the music industry ignore Guy for a dozen years until he upstaged Eric Clapton at an Albert Hall concert and scored a contract to record Damn Right I Got The Blues . . . but somebody did come up to Guy on the street back in the Fifties and offer him a job. That someone was Muddy Waters, and Guy was just a kid from Louisiana with a guitar and an attitude.

Buddy Guy’s career is a walk through blues history.

Waters found him adrift on the streets and hungry, asked if he could play that guitar he was carrying and got him his first playing job in Chicago.

The late Willie Dixon -- Chess Records producer and writer of Little Red Rooster and dozens of classic blues songs – took the young Guy into his charge and by the time the Sixties rolled around – Clapton and Jeff Beck (both of whom appear on Damn Right along with Mark Knopfler and others) were name checking Guy and playing alongside him.

Through the Seventies and Eighties, when blues went into decline in the public perception, Guy just kept doing it, through Europe, the festival circuits, with harp player Junior Wells . . . anywhere he could get a gig.

“I never said no to playing because that is what I just love to do. And there’s not many of us left now, so there’s pressure on me because people say, ‘Who's going to do it if you don’t?’

"But all through those years when I wasn’t recording I figured if I travelled and played it would happen for me again. I was there and available but those record companies weren’t interested."

“It’s thanks to the late Stevie Ray Vaughan, Beck, Clapton, and Bonnie Raitt this music is getting heard again. When they speak, people in record companies listen, and when John Lee Hooker got those Grammys they recognised this stuff could sell and they had been overlooking it. 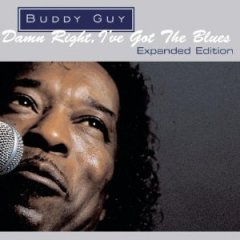 “And most blues people aren’t expensive to record. We love the music and just want to get it out there. It don’t cost $20 million to record and promote a blues album, we do it cheap and it sells itself.

"Although I did learn in my early days that record companies might not pay you!"

The phenomenal success of Damn Right – one of the few albums where Guy has been offered time to rehearse and do retakes - has brought Buddy Guy’s name back to its rightful place in the rollcall of great blues artists.

And this man -- who at every opportunity deflects praise on to those heroes, black and white, who have created this music -- still says he has something to prove, Grammy award notwithstanding.

“I have a couple of shots of cognac before I go on but don't party anymore, I have to be in good shape to give everything to my next show. I try to do a job that won’t be forgotten.