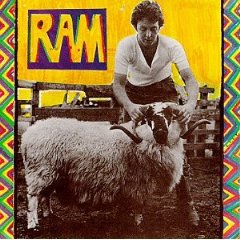 Sir James Paul McCartney has released around 50 albums under his own name  -- or that of Wings, with his late wife Linda, or under some other nom de disque -- since the break-up of the Beatles in 1970.

That's about an album a year, and even if we take out live releases or compilations, his strike rate is astonishingly high -- although diminishing sales returns suggest few people knew about, let alone heard, his mid 80s album Press to Play (good reviews, his poorest selling album at that time) or were aware of his experimental albums in the 90s with producer Youth (as The Fireman).

But there was a time when people actually waited for an album by the former Beatle, especially in the early 70s -- and Ram was much anticipated as his first proper solo album.

It's predecessor McCartney in 1970 was a deliberately low-key affair of mostly acoustic songs, many of them having floated around in the last gasps of the Beatles career. It was a modest and likeable affair -- it contained a couple of fine tracks (Every Night and Maybe I'm Amazed) -- and, even if it seemed slight, for the most part people were prepared to be forgiving. The guy had just been through a painful and public divorce (with litigation) from his former bandmates.

But that only raised the stakes -- with the public and McCartney -- for what came next. It was to be Ram for which he auditioned and recruited various musicians (on McCartney he'd played every instrument himself) and took the project very seriously indeed.

"No smoking pot, no drinks or carrying on, nothing," said guitarist David Spinoza later. "Just straight ahead. He came in at nine every morning. We'd listen to what we'd done the day before then it was just eight hours of just playing. He's not a very loose cat. He just wants to make good music."

Yet despite the serious and sometimes arduous sessions there is a sense of joy and playfulness about much of the album of a kind that would be seldom heard again from McCartney.

For the blunt rocker Smile Away (for which he adopted his famous Elvis/Little Richard vocal style) he jokes about having smelly feet, 3 Legs is country-funky and Heart of the Country a light pastoral piece.

Ram On is a slight throwaway in the manner of the McCartney album -- and for the terrifingly good and always overlooked Monkberry Moon Delight (which has Linda's little daughter Heather on backing vocals) he rips through the nonsense lyrics in the manner of coffin-rocker Screamin' Jay Hawkins -- who later had the good sense to cover it.

Ram -- the only album he ever co-credited to Linda whose name also appears in some songwriting credits -- wasn't without ambition however, and Uncle Albert/Admiral Halsey was merely a pastiche of song fragments that he wove together in the manner of the medley on Abbey Road, and managed a memorable segue.

The Back Seat of My Car is equally expansive and for both of these songs McCartney embellished them with the New York Philharmonic Orchestra which he conducted.

Not surprisingly, given the tension with his former bandmates, the album wasn't without controversy: on the back cover is a photo of a beetle fucking another, and songs like Too Many People ("you took your lucky break and broke it in two"), 3 Legs (which all three other Beatles took to be a poke at them) and Back Seat of My Car ("we believe we can't be wrong") raised the ire of John Lennon particularly who took them as personal attacks.

"We believe they can be wrong" he tartly observed -- and on his subsequent Imagine album he replied with the acerbic How Do You Sleep? ("those feaks was right when they said you was dead") which also had George Harrison on guitar.

The album also came with a postcard of Lennon holding a pig in the manner of the Ram cover, should anyone miss the point.

Lennon later said he liked bits of Uncle Albert/Admiral Halsey but Ringo was less than impressed: "I don't think there's one tune . . . I just feel he's wasted his time, he seems to be going strange".

And in McCartney's long career Ram does seem a strange album. While there is no doubt he was scoring some points it doesn't detract from the diversity, moments of genuine charm and other places where he seems to be simply enjoying himself and exploring possibilties.

Chris Charlesworth in Melody Maker at the time said it was "a good album by anybody's standards and certainly far better than the majority released by British groups and singers. Trouble is you expect too much from a man like Paul McCartney. It must be hell living up to a name."

Yet the album doesn't feel that desperate -- and over the years it has grown in stature (unlike Band on the Run which was equally acclaimed then and now, quite rightly).

McCartney seemed to be attached to it also, in '77 he released an instrumental version of it as Thrillington under the name Percy "Thrills" Thrillington. 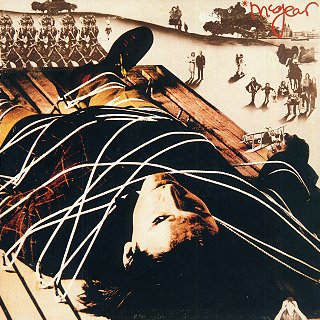 The closest cousin to Ram is an interesting one in itself.

It is McGear from '74 by McCartney's brother Mike (who styled himself Mike McGear). With Paul and Linda and Wings on hand, and a collection of diverse songs, a few by McCartney, it has a similar feel -- and is worth seeking out.

McCartney's influence has been growing in recent years as Lennon's has been somewhat waning, although Andy Partridge of XTC, Karl Wallinger of World Party (no Ram, no She's the One for Robbie Williams?) and Harry Nilsson (a close friend of Lennon) always professed admiration.

These days you can hear McCartney in singer-songwriters like Ron Sexsmith and Jude, bands like alt.rockers Midlake, and Josh Ritter (who said his album The Historical Conquests was conceived with Ram in mind) and locals like those on the Lil Chief label (who had a short-lived party band which played Ram in its entirety).

McCartney's reputation has been rehabilitated and his work more accepted over time, just as Lennon's has been preserved in amber and therefore diminished. Lennon the man and myth is bigger than most of his solo music.

In any countback on McCartney's very long career, obviously Band on the Run quite rightly stands out as his chart-climbing pop-rock album/moment. But the genesis of it was on the much less anxious and -- despite what Spinoza said of Macca the man -- much more loose album Ram.

We never heard it's like again on the dozens of McCartney albums which followed. Until maybe Flaming Pie and Chaos and Creation in the Backyard decades later?

But Ram remains a standout in his catalogue for its sheer diversity and unalloyed pleasure.

I have to agree with you. I hate Maxwell's Silver Hammer as much as the next man, but this album is brimming with melodies and charm. I can see how it would get slated when Lennon had just done Plastic Ono, but (now I am married with young children) Ican can understand that this album seems like Macca and his new wife and kids are having a ball and not caring what anyone thinks. Paul's diverse vocals are great and the whole album is very Beatley and an absolute joy. This has been my family's album of the summer - for happy car trips around Auckland.

Thankfully I had an older brother who was a McCartney fan, so this was a very influential bit of music for me as a young teenager. It's taken buying 4 copies to finally get a decent one in my vinyl collection, but it has to be up there as one of the best records of it's time, with it's complete rawness. A great album with songs that are just classic to those who listened to it a lot. Brilliant. GRAHAM REPLIES: If you are a fan of Ram as it seems (four attempts! It has been reissued on vinyl through his McCartney Archive Collection) then type in "mcgear" into Elsewhere's search and check out that album by his brother, which is basically a Wings/Ram-style album under Mike's name.