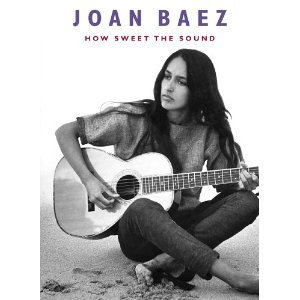 Time to flip all the cards and say that until recently I was never as smitten with Joan Baez as so many people were. Certainly the purity of her voice was striking and when I started discovering Dylan in his early days she seemed to be that dark angel hovering in the wings -- but none of her folk music really stuck with me.

I never much liked any of that wimpy "we shall overcome" whinging of folkies either and, wrongly as I learned, I thought she was just another of those: sort of holding hands and waiting for a change to come but not doing much other than singing about it.

She also seemed ridiculously out of place in the Woodstock movie -- but then again I was always into pop and rock so Amazing Grace (which I had heard enough at home and my dad never liked) never meant much to me.

Well of course, I was wrong all the way and Baez really was an activist/singer/poet/role model and so on -- and I was listening to Blue Cheer or T Rex.

This remarkable doco, which reflects on 50 years of performances, will change even the most cynical or skeptical of hearts.

With striking b'n'w footage of her singing in folk clubs in the late Fifties through interviews with Dylan, Roger McGuinn and David Crosby speaking about her importance in the folk era; and punctuated by footage of a charmingly self-deprecating Baez today, she comes off as a reluctant heroine for a generation, speaks of the struggle to remain an ordinary person who was feted as being extraordinary, and her honesty - always, as early self-aware footage illustrates -- about how irresistible fame, and being on the cover of Time in '62, could be. She speaks of her family (supportive, her mother and father pacifists, their itinerant life which included time in Baghdad where she was mistaken for an Arab because of her dark skin); the panic attacks at the height of her fame (and how those around her ignored it because it was in their best interest she continued to perform); and her conversion to non-violence when she heard Martin Luther King speak.

There are extracts from her audio diary of the early Sixties when she was playing to integrated audiences while there was still segregation; footage of her singing at the famous march on Washington . . .

When Dylan and his music entered her life she realised this was the direction to go with bringing music and contemporary politics together. And her mothering instincts poured about "because he was just a scruffy little mess". There is the terrible tour of Britain in which he increasingly withdrew (they both speak of this with regret in recent interview footage), Crosby testifies to her courage in the anti-Vietnam protests, her brief marriage to David Harris . . .

And that is just her first decade, up to Woodstock -- which now makes perfect sense to me.

The Sixties takes up two thirds of this 90 minute doco although in many ways the final half hour which picks up the Seventies (the Rolling Thunder Tour with Dylan and others, going to Cambodia during the Vietnamese incursion there, her dedication to peaceful activism . . .) is as interesting and revealing.

Shot in high definition, How Sweet the Sound has Super 8 snippets from family films, historical archival footage of her visit to North Vietnam while there was a US bombing raid; Martin Luther King Jr. outside the prison when he visited her after she was jailed for staging a protest; in Sarajevo for a concert in the middle of the 1993 siege, her return to the city on a 2008/09 tour . . .

She laughs about herself as the Virgin Mary/Miss Dove in the folk scene as opposed to Dylan; is consistent in her political beliefs and her faith in the power of song; speaks movingly of how she never really dealt with the death of her sister Mimi . .  and there is bonus content of her in conversation with Steve Earle, Vaclav Havel and others.

This film spotlights the life of a remarkable woman. One, I am ashamed to say, I was very wrong about.