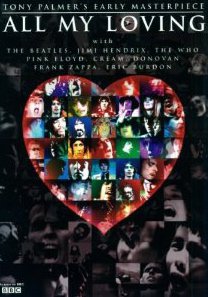 At the time when this film screened on television in 1968 -- after the Epilogue, the last offical programme every night in Britain in those days, as director Palmer notes in the interview footage added to the DVD edition in 2007 -- pop music was widely spoken of as the new classical music.

It was in those day-glo days when classical music of the traditional kind no longer captured the zeitgeist, as Paul McCartney (who doesn't use that word) notes when he says in an interview for the doco that the Beatles read the papers like everybody else: "And if everyone wants to say the same thing at a certain time it's handy being a songwriter, you can put your finger on it".

Palmer -- who later made the exceptional All You Need is Love series on the history of popular music -- uses the escapist lyrics of that song as his ironic intro and outro quotes, but between times delivered a film which swirls through the current music scene: thrilling live footage of Cream at their peak, the Who demolishing a stage and their gear at Peoria (on a tour which had them driving 800 miles a day between gigs!), Derek Taylor talking aout how the Beatles would be called upon to "lay hands" on "the cripples".

But there is more.

Palmer also layers in -- often unexpectedly and with sphincter-clamming effect -- the social backdrop: the music was being played out against peace'n'love'n'drugs . . . but also the war in Vietnam, race riots in the US and friendly bobbies in Britain taking their batons to protesters.

The Frank Zappa story about the US Marines (see clip below) is uncomfortably pertinent in this context.

Palmer also goes to the old Tin Pan Alley guys now out of work (it used to be just a handshake and what can I do for you says one spiv-like character) and to a jingle exec in the States who sits behind a name-plate on his desk which reads "Selling Spoken Here".

What the new breed -- Donovan, Eric Burdon, Hendrix, McCartney and many others -- make clear is the selling is over, we're here to change the world.

Admirable and naive, says Palmer in the more reent interview footage (with a bottle of Jacob's Creek on the table by the fax/printer), but honest nonetheless.

"Pop is the language of profit" says another, McCartney amusingly notes (and he might be slightly stoned) that when they saw the screaming hordes they could have used their influence for "evil" but it was important "to get power to use it for good".

It is curious that it was through Palmer's friendship with John Lennon that this 50 minute film should have come about, because Lennon is conspicous by his absence: George Harrison's lovely mum gets more screentime.

There is much amusement to be had -- the Tin Pan Alley guys notes Fiftied rock'n'roller/skiffle singer Tommy Steele, luvverly fellah that he was, was once voted the number one guitar player in Britain and he never played guitar on any of his of his records.

But be warned: while this freewheeling, deliberately inconclusive and utterly fascinating doco is full of interesting comments from a time when the wheels of the world were turning in another direction, there is footage here which wil make you recoil in horror: seeing a Vietnamese man on fire -- and he's not a self-immolating monk -- is horrific. And no amount of Jimi playing Wild Thng can change that.

Towards the end writer Anthony Burgess gets to offer his sceptical (and perhaps correct) opinion on popular culture of the rock kind . . . and it is followed by Cream again. They are singing "I found out today, we're going wrong".

Make what you will of that juxtaposition.

All My Loving is historic, gripping, instructive . . . and not a little sad.