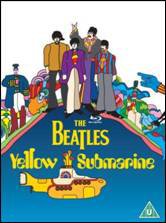 Movie producer Al Brodax said it began with a 3am phone call from John Lennon: Wouldn't it be great if Ringo was followed down the street by a yellow submarine?"

That -- allegedly/mythically -- was the start and (aside from them knocking off a few songs for the soundtrack and a short appearance before the credits) the end of the Beatles' involvement with the animated movie Yellow Submarine, released 50 years ago.

Of course it was a little more complex than that, but when it comes to the Beatles it is usually "print the legend". McCartney has consistently said the idea was his, based on a half-awake dream, and that he conceived the idea as a vehicle for Ringo.

Whatever its origins, with the clarity hindsight brings, the Yellow Submarine movie of 1968 has the feel of a last flicker of innocence before fragmentation.

From there on it was an unfocused but excellent double album (which academic writers are now calling post-modern), the arrival of Yoko, the niggling Let It Be/Get Back sessions and the career coda of Abbey Road before litigation and sniping from behind their beards.

Watching Yellow Submarine today -- astonishingly half a century later -- reminds you of none of that.

The film is a classic of the British psychedelic style, full of visual and verbal in-jokes and contemporary references, many of which will go past an audience today. It's also very silly.

It wouldn't be much good in a multiplex -- the story proceeds at a glacial pace and the animation is too grounded in its period -- but it plays just fine on the small screen at home. And it's still interesting when put in the larger context. 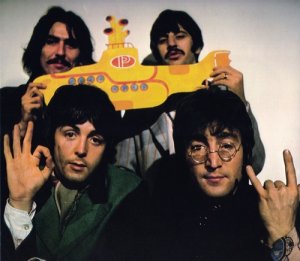 If A Hard Day's Night (1964) was a Beatles mockumentary, and in Help! ('65) they played cartoon versions of themselves swept up in that early 007 infatuation with "exotic" foreign places (for tax purposes), by '68 they had literally dropped out of the picture.

While they got on with making remarkable music in the studio, opening their Apple boutique and taking mind-altering drugs, Yellow Submarine allowed them a doppelganger providing pure entertainment product again. 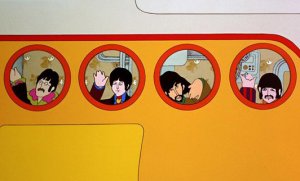 As Beatle biographer Nicholas Schaffner said, it was a classic example of a myth's capacity for self-perpetuation without the participation of the gods themselves.

The accompanying soundtrack album -- six Beatles songs, only four of them new, the second side George Martin's orchestral pieces and liner notes about The White Album -- was a throwaway and the poorest seller in their catalogue.

The film -- re-presented on DVD and Blu-ray with enhanced colour and sound, and a short piece of missing footage reinstated -- is simple dumb fun. Its story could be written in crayon. Pepperland is overtaken by the fun-fascist Blue Meanies but then the Sgt Pepper band aka the Beatles save the land, after many misadventures, through love (as in "all you need is . . ."). 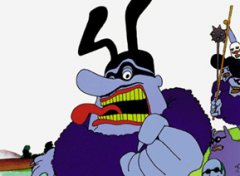 Throughout there are hints of Andy Warhol, Dali and Picasso, and references to Freud, the Rolling Stones and 2001: A Space Odyssey (which had been released a few months earlier).

And the movement and gestures of the head Blue Meanie (right) was based on newsreels of Adolf Hitler.

Read like that, Yellow Submarine was Fantasia for the pot-head set.

But essentially the film's charm is that it advanced no greater agenda than the enjoyment to be had during its screentime and was little more than a Beatles tie-in while their career took them elsewhere.

The Yellow Submarine Songtrack CD originally released in 1999, however, was a huge improvement on the original soundtrack album. It dumped Martin's orchestrations in favour of all the songs in the film -- which is why it is billed as a "songtrack" rather than a soundtrack.

It includes classics such as Nowhere Man, Sgt Pepper's and Eleanor Rigby. From the original album there's the terrific Lennon rocker Hey Bulldog (the one which had been cut from the originally released print) and a couple of overlooked George Harrison songs -- Only A Northern Song, allegedly knocked off in an hour when the film-makers wanted another track (a good story but not true) and It's All Too Much, a feedback-infused psychedelic cruncher. 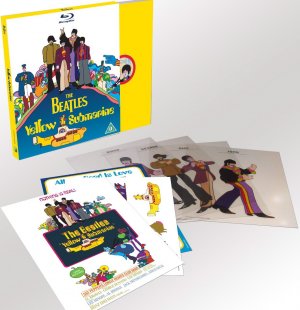 So the new "songtrack" is an encapsulation of that period of English psychedelia which blended Edwardian foppery with the garish colours of a Peter Max poster, and the digitally enhanced DVD/Blu-ray came with added behind-the-scenes footage, transfers, reproductions of film cells of the four protagonists . . .

It also links to this interactive book.

And the film itself?

It's gently slow, charmingly good-humoured, very colourful and has music by two of the greatest songwriters of the last century. And another more than decent one.

Even so, you may see it as a loopy period piece and wonder what the fuss was about. But show it to the kids and they'll love it -- and probably become Ringo fans.

As kids of all and any age invariably tend to do.

There's a nice and possibly true story that when Sean Lennon was about four he went to a friend's birthday party and the family had rented Yellow Submarine on video to play.

He went home and asked his dad, "Were you in the Beatles?"

There is much more about the Beatles at Elsewhere starting here.

Yellow Submarine was great then and it still is! I watched it as a child of the 60s, and then later my own kids watched it. It was part of their growing up..... Years later, some time in the 90s, as they partied in the lounge, I thought, I know that song, and yes! They stil knew all the words!!!
Yep, I bought the vinyl, the cd, the video, the dvd, and now the new improved dvd...I'm sure there's a little man somewhere working for Apple whose job it is to work out yet more ways to get money out of us old Beatle freaks... Well, he's doing it very well!!!

Harrison also made a comment on a talk show in the 80’s that the first time his (then) 7 yr old son mentioned the Beatles was when he asked George to show him the piano lick for “Hey Bulldog” ( what a great track!) after seeing this film ...