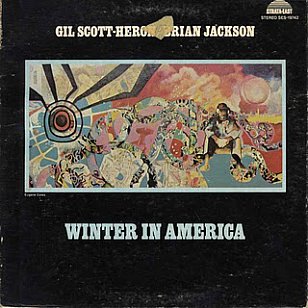 The great pre-rap, spoken word-cum-jazz-poet Gil Scott Heron is perhaps best known for his angry The Revolution Will Not Be Televised (see clip below) in which he assailed those uncommitted or comfortable blacks who seemed to be standing on the sideline while the streets ran red and Black Panthers had their fists raised.

For him it was never "if" but "when" the people's revolution would come (and his piece sounds remarkably similar to The Last Poets' When the Revolution Comes of the same time).

But in many ways it didn't come and by the mid Seventies with significant black leaders dead (Martin Luther King, Malcolm X) or imprisoned (Panthers), the war in Vietnam still raging and Nixon back in the White House, the mood turned sombre.

On this remarkable piece Gil Scott Heron with his longtime musical collaborator Brian Jackson addresses the spirit of the nation with a sense of sadness and defeat, and places it in the greater context of American history at moments of great sorrow and confusion.

Just as Paul Simon captured something of the times in American Tune in '73 ("I don't know a soul that's not been battered, I don't have a friend that feels at ease"), so too Scott Heron here delivers a personal but universal statement imbued with deep sadness at what has come to pass.

I admire your selection - 4 tracks from Gil on my UK Jazz Radio show next week with this being one of them. Brilliant.